Farmers' Protest: The Delhi government and police agreed to let farmers hold the Kisan Sansad at Jantar Mantar between 11am and 5pm.

Amid heavy security, a group of 200 farmers protesting the Centre's three controversial farm laws started a 'Kisan Sansad' at central Delhi's Jantar Mantar on Thursday, a few metres away from Parliament where the Monsoon Session is underway.

Farmers said the idea behind organising the 'Kisan Sansad' was to show that their protest is still alive and tell the Centre that they too know how to run the Parliament. Police said the security has been tightened and thousands of personnel have been deployed in the area in view of the protest.

The Delhi government and police on Wednesday agreed to allow farmers to hold the Kisan Sansad at Jantar Mantar from today till August 9 between 11 am and 5 pm.

The protesters have been asked to give an undertaking that all Covid norms would be followed and the protest would be peaceful, PTI reported.

This is the first time since the violence in the national capital during a tractor rally on January 26 that the authorities have given permission to protesting farmer unions to hold a protest in the city.

Here are the LIVE updates on farmers' protest:

Jul 22, 2021 23:48 (IST)
Urging Foreign Governments To Ease Travel Curbs For Indians: Centre
The Centre on Thursday said it has been taking up with foreign governments the issue of easing travel restrictions for Indians in view of an improvement in the coronavirus situation in the country.

Indian students studying in institutions in China, Italy and several other countries have been stuck here in view of the travel restrictions.

"With the improvement in the Covid situation in India, we have been taking up with foreign countries the issue of easing travel restrictions for Indians. We believe that this is an important element towards economic recovery," Ministry of External Affairs (MEA) Spokesperson Arindam Bagchi said at a media briefing.

A liver abscess (Pus formation in the Liver) is commonly caused by a parasite known as Entamoeba histolytica which is transmitted by contaminated food and water.

"During the second wave of the COVID-19, in April-May 2021, a number of COVID-19 patients presented with some unusual manifestations. We saw for the first time in last two months unusually large and multiple liver abscesses in fourteen patients after recovery from COVID-19 infection," said Sir Ganga Ram Hospital Professor Anil Arora.

Jul 22, 2021 21:58 (IST)
China Rejects WHO Plan For 2nd Coronavirus Origin Probe Defies Science
China rejected on Thursday a World Health Organization (WHO) plan for a second phase of an investigation into the origin of the coronavirus, which includes the hypothesis it could have escaped from a Chinese laboratory, a top health official said.

The WHO this month proposed a second phase of studies into the origins of the coronavirus in China, including audits of laboratories and markets in the city of Wuhan, calling for transparency from authorities.

"We will not accept such an origins-tracing plan as it, in some aspects, disregards common sense and defies science," Zeng Yixin, vice minister of the National Health Commission (NHC), told reporters.

Zeng said he was taken aback when he first read the WHO plan because it lists the hypothesis that a Chinese violation of laboratory protocols had caused the virus to leak during research.
Jul 22, 2021 18:26 (IST)
Farmer Protest LIVE Updates: There will be three sessions of the 'Sansad', says farmer leader
Farmer leader Raminder Singh Patiala said, "There will be three sessions of the 'Sansad'. Six members have been selected who will be chosen as speaker and deputy speaker for the three sessions. In the first session, farmer leaders Hannan Mollah and Manjeet Singh were selected for the posts".
Jul 22, 2021 16:57 (IST)

Farmers are protesting at Delhi border for 8 months. Over 500 farmers have died. Yet the govt did not see their condition at borders. They say that the laws will not be repealed. What's the point in talks?: Harsimrat Kaur Badal, Shiromani Akali Dal pic.twitter.com/VXtxn7Dcg7

Over 200 #farmers today protested at Delhi's Jantar Mantar against #FarmLaws amid tight security.

The Delhi government and police had yesterday agreed to let farmers hold the Kisan Sansad from today till August 9 between 11am and 5pm.#FarmersProtestspic.twitter.com/lpr6gjnMKB 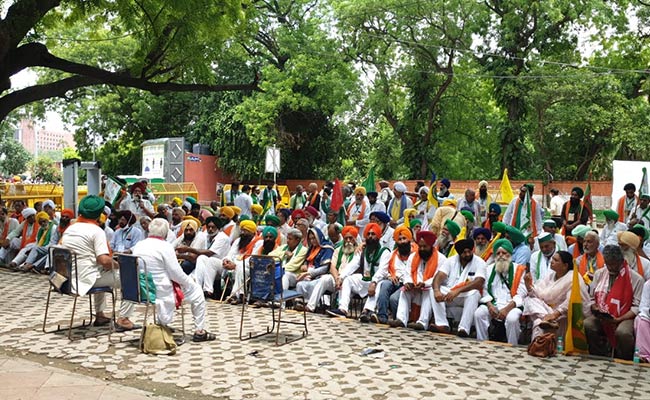 Congress leader Rahul Gandhi along with party MPs staged a protest against #FarmLaws at the parliament premises pic.twitter.com/k1UN5gFGQC

#FarmersProtest | "Farmers have issued whip to parliamentarians. This has happened for the first time": @_YogendraYadav, President, Swaraj India

Delhi: Punjab Congress MPs staged a protest in front of Gandhi Statue in the premises of Parliament, over three farm laws pic.twitter.com/nMgRPNjIjp