Farmers Protest: Police were fed by the community kitchen in Haryana's Karnal

As farmers clashed with police over their march to Delhi to protest against the farm laws, a heart-warming video has emerged from Haryana's Karnal - where the langar (community kitchen) of a religious centre served a scrumptious (and free) meal to a large number of policemen.

While it is unclear if the religious centre, which is located along National Highway 1, is connected with the protesting farmers, the video presents a welcome alternative to the chaos that is unfolding around 120 km away and underlines the need for humanity and empathy from all sides.

In the video dozens of policemen dressed in uniform (some with lathis and in what seems to be riot gear) are seated facing each other in two long rows. Volunteers from the langar (all of whom are wearing face masks) can be seen serving them rice, dal, vegetables and other foodstuff.

As the 70-second video plays out, more cops can be seen arriving and settling down to eat, using their riot vests as a sheet on which to sit. Although voices are muffled, at one point in the video someone can be heard saying, "Thank you, thank you, thank you."

All of this takes place along a small bridge over a canal; the video pans to show parked police vans. 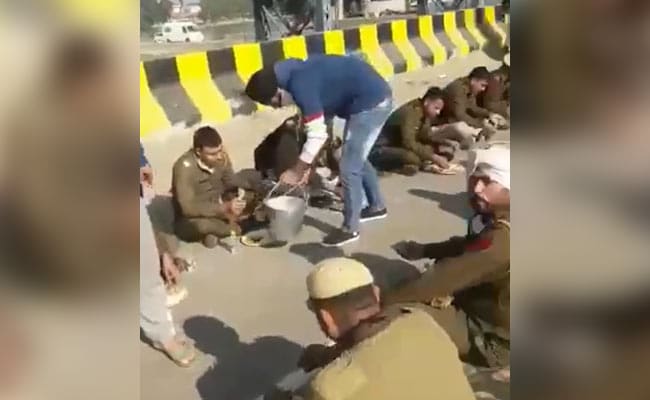 Farmers Protest: The police were fed by the community kitchen in Haryana's Karnal

Farmers from several states - including Uttar Pradesh, Haryana and Punjab - began marching on Delhi on Thursday, only to be confronted by a Haryana police force instructed to use lathi charges, tear gas and water cannons - in the middle of winter - in an attempt to beat them back.

The cops also set up barricades wrapped in barbed wire and sand-laden trucks, and dug up roads to act as trenches. Visuals showed scenes that wouldn't look out of place in a war zone.

This morning visuals emerged of farmers putting aside their concerns to help move police barricades and allow ambulances through, potentially saving the lives of unknown people.

Thousands of farmers reached the Delhi border on Friday morning, where they were met with more police barriers and tear gas. They came with tractors carrying food and essential supplies, and have said they will not return until the centre has repealed the farm laws.

They are protesting laws the centre says will reform the agricultural sector by removing middlemen and improving farmers' earnings by allowing them to sell produce anywhere in the country.

Farmers and opposition parties allege that the laws will deprive the farmers of guaranteed minimum price for their produce and leave them at the mercy of corporates.