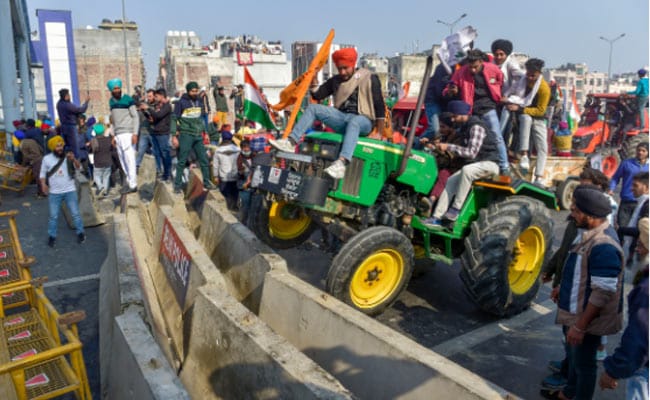 Some protesters breached Delhi's historic Red Fort during the tractor parade on Tuesday.

Farmers protesting the government's new agricultural laws on Wednesday said they have suspended plans for a march to parliament next Monday, when the country's annual budget will be unveiled, after violence marred the massive tractor parade a day ago.

The farmers, however, placed the blame on "miscreants" and "agents" of the government for the violent clashes that erupted between farmers and authorities after some in the tractor rally strayed from agreed routes, leaving one person dead and dozens injured.

Tens of thousands of farmers, protesting the reforms of the agriculture sector that they say benefit big private buyers at the expense of growers, have been camped on the outskirts of Delhi for two months refusing to budge till the government scraps the laws.

A protest parade of tractors around the city's fringes to coincide with Tuesday's Republic Day celebrations turned into chaos as some broke through barricades and clashed with the police, who used tear gas and batons to try to restrain them.

"More than 2 lakh tractors joined yesterday's rally. 99.9 per cent protesters were peaceful. It was a target of government's conspiracy," Balbir Singh Rajewal, one of the senior leaders of the farmers' movement told a news conference at Singhu, one of the epicentres of the sit-in protests.

He and other protest leaders accused Punjabi actor Deep Sidhu and an union Punjab Kisan Mazdur Sangharsh Committee of a role in diverting the tractor rally from the agreed route and storming of Delhi's historic Red Fort.

"These miscreants had declared that they will go to Red Fort. They had a deal with government. Authorities let them easily enter Red Fort. Deep Sidhu is Amit Shah and (PM Narendra) Modi's agent," Mr Rajewal said.

Apologising to the public for the chaos and unrest on Tuesday, he said, "1st Feb's march to parliament is postponed. We will have a jan sabha (public meeting) and anshan (hunger strike) on January 30 which is Mahatma Gandhi's death anniversary."