Farmer Unions To March To Raj Bhavans Across India Today

The marches will also register the farmers' protest against the non-fulfilment of various promises by the government, farmer leaders said on Friday. 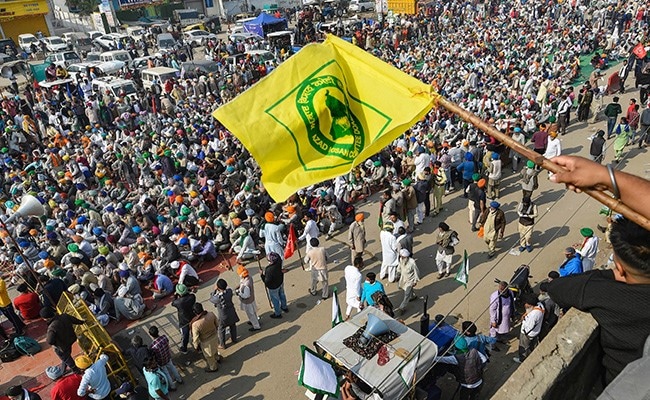 Farmer unions will take out marches to Raj Bhavans across the country today to mark two years since they launched their agitation against three farm laws of the Centre that have since been scrapped.

The marches will also register the farmers' protest against the non-fulfilment of various promises by the government, farmer leaders said on Friday.

Farmer leaders claimed that the government had given to them in writing that it would hold a discussion and bring a law for minimum support price (MSP) of crops, but nothing has been done so far.

Thousands of farmers, particularly from Punjab, Haryana and western Uttar Pradesh, protested at the borders of the national capital for over a year demanding the repeal of the three farm laws. Prime Minister Narendra Modi announced repealing the three laws in November.

The protest was called off subsequently.

"They gave us in writing and agreed to our many demands but nothing has been done. The government has proved it is a traitor who has cheated the farmers of the country. They are protecting the corporates. They have proved they have no intention of fulfilling our demands," Samyukta Kisan Morcha (SKM) leader Hannan Mollah told Press Trust of India over phone.

Mr Mollah is in Lucknow to attend the protest march on Saturday.

The SKM, a body of farmers' unions that spearheaded the agitation against the agri laws, has also called a meeting on December 8 to decide the future course of the movement.

"We have seen that the government is not ready to listen to the people. We have started another movement. Tomorrow we are holding rallies across the country. This time our movement is not limited to Delhi but the entire country. The farmers will march to the Raj Bhavan of their respective states and hand over a memorandum of the governor," Mr Mollah said.

The farmers' body claimed that neither the committee on MSP had been formed correctly nor the "false" cases registered against farmers during the agitation were withdrawn.

While announcing the repeal of the three farm laws in November last year, Prime Minister Modi had promised to set up a committee to discuss the farmers' demand for a legal guarantee on MSP.

The SKM has rejected the government's committee on MSP, saying "so-called farmer leaders" who supported the now-repealed farm laws are its members and do not talk about ensuring legal rights of farmers.

Meanwhile, SKM (Non-political) member Abhimanyu Singh Kohar said the government has no intention to fulfil the farmers' demand and another movement is needed.

"We have realised that the government has no intention to fulfil our demands. Earlier they agreed to meet our demands so as to end the protest," Mr Kohar said.