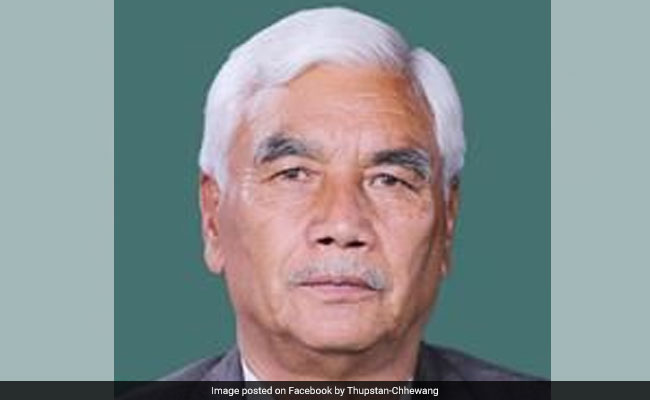 Days after resigning from the BJP's primary membership, Lok Sabha MP Thupstan Chhewang has said "false" promises and unwise decisions were the reason behind his decision, and not the desire to pursue "spiritual life" as projected.

In a letter addressed to Prime Minister Narendra Modi, the Ladakh MP revealed his reason to quit the BJP and resign from the Lok Sabha ahead of the upcoming parliamentary elections. Mr Chhewang's resignation is yet to be accepted by the party and the Speaker.

"I have decided to keep my resignation from the party and the Lok Sabha a low-key (affair) as my intentions were never to score political points. However, I am constrained to give vent to my feelings now in view of the propaganda being indulged by the state party president about my writing (a) letter to the party's central leaders 'for the past around one year' expressing my willingness to quit active politics and opting for spiritual isolation. This is far from truth," Mr Chhewang said in his letter.

Last Thursday, Jammu and Kashmir BJP president Ravinder Raina had said the 71-year-old leader had resigned from the House and the party to pursue a "spiritual life", as he had been suffering from health issues.

As a local representative, Mr Chhewang said, his position was increasingly becoming morally-and-politically untenable, with the party and its central leaders exhibiting little concern for implementing its last Lok Sabha election promise that the demand of the Ladakh region for a Union Territory status would be met within "six months".

"We exposed ourselves to the charge of making false promises even on such sentimental issues as the inclusion of the Bhoti language in the eighth schedule of the Indian constitution.

"I kept on writing to almost all party leaders - encroached at times even upon your valuable time - and also spoke in the national executive meetings reminding all about our commitment to the region," he said.

Mr Chhewang accused the leaders of never caring to logically explain the reasons for the delay in executing the electoral assurances, adding that all pleas fell on deaf ears.

Some of the central party leaders and the current state leadership made matters worse by repeatedly rubbing salt into the wounds of Ladakh, he alleged. "I felt that I had no choice but to keep away from their thoughtless actions in our region."

Mr Chhewang said it was strange that the party decided to contest all seats in the Kargil hill development council elections, where it had no base, while diverting resources, energy and attention from about half-a-dozen seats where the party had a winning chance.

Pointing out to the way the chief executive councilor of the Leh Hill development council was "unceremoniously" dropped, much to the anger and anguish of the party loyalists, the Ladakh MP said all these measures had left the local workers in a state of disarray. "These are examples of the total absence of application of mind with the 2019 parliamentary elections round the corner."

"In 2014 and its aftermath we had the privilege of you as the prime minister going around the country projecting the first time BJP victories in the Ladakh parliamentary constituency and the Leh hill council as signs of the increasing reach of the party. What could you tell (the) people now?" he asked.

Mr Chhewang said what was achieved five years ago was on the strength of the "slogans" which, to the electorate at large, would sound like "empty rhetoric" at this juncture.

Reacting to the letter of Chhewang, Mr Raina said the Ladakh MP was not politically active for the last one-and-a-half years and remained aloof from the party activities during the recently-held Kargil autonomous hill development and urban local body polls.

"He (Chhewang) had himself told many prominent party leaders, including myself during a recent visit to Ladakh, about his plan to leave politics and visit Bodh Gaya (in) Bihar to pursue spirituality in accordance with Buddhism."

Mr Raina said the Union Territory for Ladakh was in the manifesto of the BJP and was discussed a number of times at party level.

"The BJP is the only party which always supported the demand and, after becoming MLA, I, personally, moved a private members' bill for the Union territory status for Ladakh, given its topography, large area, and security concerns in view its proximity to Pakistan and China, but the bill was not taken up and was dropped," he said.

Mr Raina said in view of Article 370 of the Constitution, such a bill was needed to be passed by a two-third majority, but the BJP was in the coalition government and did not enjoy the numbers.