Although the former cricketer had condemned the death of 40 CRPF soldiers in a terror attack at Pulwama, he reportedly followed it up by asking how "an entire nation can be blamed for the deeds committed by a handful". 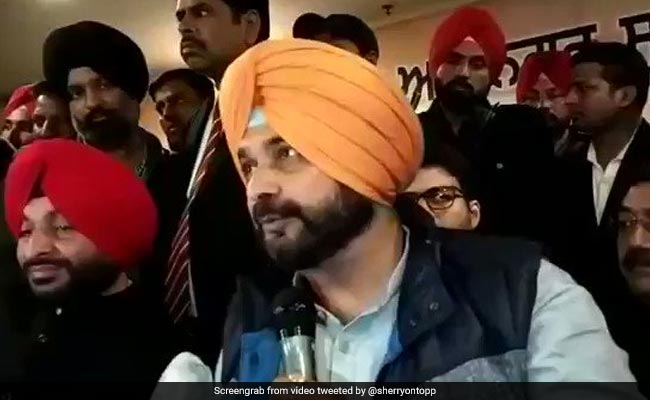 A day after Navjot Singh Sidhu faced a public backlash for allegedly trying to defend Pakistan's case in the Pulwama terror attack, the cricketer-turned-politician today claimed that his comments had been "distorted". "I was only saying that we need to find a permanent solution to the problem of terrorism. Why should soldiers be made to suffer each time? Such attacks have been happening for the last 70 years," he said.

Although Mr Sidhu had condemned the death of 40 CRPF soldiers in a terror attack at Jammu and Kashmir's Pulwama in a statement on Friday, he reportedly followed it up by asking how "an entire nation can be blamed for the deeds committed by a handful". This was widely seen as a defense of Pakistan's role in the episode, and many angry netizens retaliated on Twitter by seeking a boycott of The Kapil Sharma Show - a popular television comedy programme of which the former cricketer is a member - unless he was removed. He is in the process of being replaced on the show by actor Archana Puran Singh.

"Terrorism has no religion or nationality," the Punjab Minister said in his clarification today. "The best antidote to venom is venom, and this should be dealt in the same manner. What I actually said was that we should always be open to doing good, just as we should be open to crushing evil."

He then went on to question why better arrangements were not made to ensure the CRPF soldiers' safety in Jammu and Kashmir. "When politicians come out, entire streets are blocked for their safety. But when 3,000 jawans - the very people who protect us - are out on the streets, why isn't their security a priority? They had been out since 3 am... why were they not airlifted?" he asked.

Mr Sidhu maintained that the sordid episode should not affect India's collaborative effort with Pakistan to build the much-awaited corridor to the Kartarpur Sahib gurdwara in the neighbouring country. "Now, because of these three-four people (the terrorists), will we raise a question on the Kartarpur corridor? The nation cannot bow in front of terrorists," he said.

The politician has been an active proponent of the Kartarpur corridor, aimed at linking the Baba Nanak village in Punjab with the Gurdwara Darbar Sahib in Pakistan's Narowal, for the benefit of Sikh pilgrims. Both sides are yet to finalise the modalities of travel for Indian pilgrims.