Kuldeep Bishnoi was expelled by the Congress from all party positions last month. 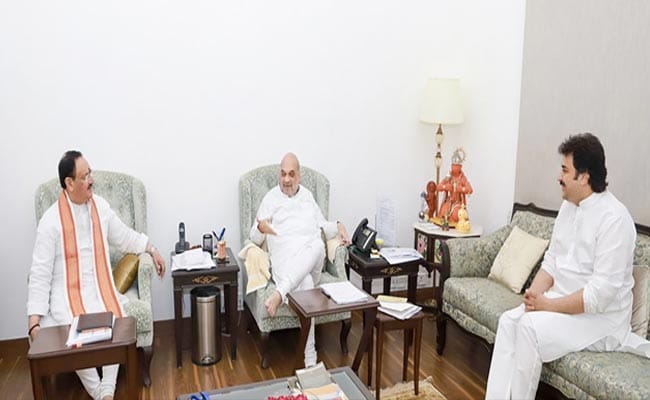 Mr Bishnoi said it was a "real honor and pleasure to meet Amit Shah".

Congress Adampur MLA Kuldeep Bishnoi, who has been warming up to the BJP after cross-voting in the Rajya Sabha polls, on Sunday met Union Home Minister Amit Shah and BJP president JP Nadda.

Mr Bishnoi was expelled by the Congress from all party positions last month. He met the two senior BJP leaders in New Delhi and heaped praises on them.

There have been speculations around Mr Bishnoi's next move after he cross-voted in last month's Rajya Sabha polls.

Mr Bishnoi has been sulking ever since the Congress ignored him for the post of its Haryana unit chief during a revamp earlier this year.

In a tweet in Hindi, Mr Bishnoi said it was a "real honor and pleasure to meet Amit Shah".

"A true statesman, I felt his aura and charisma in my interactions with him. His vision for India is awe-inspiring," he wrote.

"His easy-going and humble nature sets him apart," he said.

Mr Bishnoi said the BJP has seen unprecedented heights under Mr Nadda, who has ably led the party. "I wish him good health and a long life." After cross-voting, Mr Bishnoi had last month said he was consulting with his supporters to decide on his next course of action.

Asked if he was in touch with BJP leaders, Mr Bishnoi had then said his next step would be in the interests of the people of Haryana and his constituency.

The Congress, which is the main opposition party in Haryana, was assured of one Rajya Sabha seat by virtue of the number of MLAs it has in the 90-member assembly. However, Congress candidate Ajay Maken failed to secure the berth after Mr Bishnoi cross-voted, while the vote of an MLA was declared invalid.