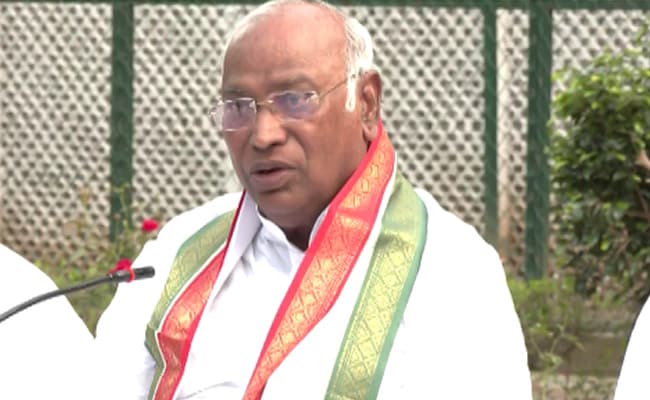 Congress president Mallikarjun Kharge Saturday hit out at the government alleging the Constitution faces an existential crisis and India is no longer a collaborative federal nation.

In a statement on Constitution Day, he alleged ever since the BJP government came to power in 2014, the RSS has used it as a political vehicle to curtail freedoms enshrined in the Constitution.

"Illegal has become legal because the fringe has now become mainstream. The foremost tangible spirit of our democracy is being distorted and disrespected by people who are using it as a means to push a completely contrasting agenda," Mr Kharge said.

In his statement titled 'The Looming Crisis of the Indian Constitution', Kharge said India's first president Rajendra Prasad had said, "If the people who are elected are capable men of character and integrity, they should be able to make the best of a defective constitution. If they are lacking in these, the Constitution cannot help the country."

He claimed that "these words ring deafeningly true as we celebrate the 73rd year of the Constitution".

A Constitution that has successfully stood the test of time for over seven decades, "today faces a fundamental crisis, indeed an existential crisis for the spirit behind its text", the Congress president claimed.

"We have reached a point where there is a growing disharmony, not just among people but also between governments and states. Ours is no longer a collaborative federal nation," he said.

The Congress chief claimed that "this crisis finds its roots in the RSS's ever-expanding reach within state institutions and the electoral (and by extension judicial) legitimacy of its ideology, with BJP in power".

"The government has completely surrendered itself and its institutions to the diktats of the RSS, an organisation that pushes hateful propaganda under the garb of social service. In fact, it is no longer incorrect to use the terms RSS and BJP interchangeably," he noted.

"We are witnessing the onset of what Baba saheb (Bhimrao Ambedkar) would have referred to as 'lawless law', riddled with never-ending infringements on fundamental rights, systematically engineered by the BJP-RSS government since they have been in power," he also said.

He recalled BR Ambedkar's caution that "if the parties place creed above country, our independence will be put in jeopardy a second time and probably be lost forever. This eventuality we must all resolutely guard against".

He said the Congress has embarked on the Bharat Jodo Yatra to unite the nation against forces of hatred and divisiveness.

"Let us unitedly take ownership of bringing India back to its constitutional values and restoring the nation to a time when these values thrived. The only way to control this new hegemonic disposition is to counter it with ideological and moral strength," Mr Kharge said.

The Congress chief also alleged that within the system, the ruling party has restricted the opposition's all avenues to express dissent.

"Routine muting of microphones in Parliament whenever the BJP's (in)actions are questioned and spaces in the media that are accessible to us are shrinking every day," he said.

Mr Kharge also attacked the government over the "misuse" of agencies against the opposition, saying, any dissent is being "tackled by coercively misusing central investigative agencies" against them.

"The functioning and independence of the Election Commission of India have been jeopardised. Opaque system of Electoral Bonds enforced as money bill has been brought to give undue advantage to the ruling party," he alleged.

"The BJP/RSS and its messengers are dividing the country along religious, caste and communal lines... There is moral surveillance in all public arenas. Privacy is being banished. Citizens and the civil society have been mercilessly attacked by the topmost echelons of power, for raising their voices," Mr Kharge alleged.