Veteran CPI(M) leader Buddhadeb Bhattacharjee was rushed to a hospital after his breathing problem aggravated on Wednesday morning. He has tested negative for COVID-19, and is responding to treatment, hospital authorities said. 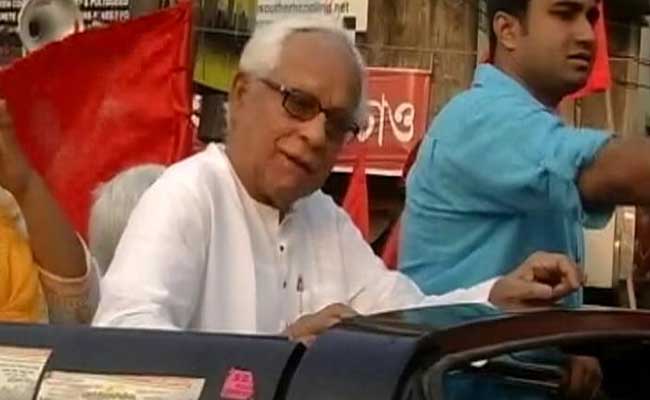 Buddhadeb Bhattacharjee, 76, has a heart disease and other old age-related ailments. (File)

Veteran CPI(M) leader Buddhadeb Bhattacharjee was rushed to a hospital in Kolkata this afternoon after he suffered severe breathing difficulties and his oxygen saturation fell to about 72. He has tested negative for COVID-19 and is responding to treatment, hospital authorities said, but has been put on non-invasive ventilatory support.

The former West Bengal Chief Minister's condition is critical and he has been put on mechanical ventilation, the latest medical bulletin at 6.32 pm by the hospital in Kolkata where he is admitted has said.

The 76-year-old veteran CPM leader was rushed to Woodlands Hospital this afternoon around 2 pm after his existing breathing problems aggravated and his oxygen saturation fell to around 70, much less than the recommended cut off of 94 on the oximetre.

"Hence, decision was taken by clinical expert team to electively ventilate after proper consent of family members," the bulletin said.
An earlier medical bulletin around 5 pm had described his situation as critical and said he was on a BIPAP, which is a non-invasive ventilatory support system.

"He is on intravenous antibiotics, steroids and other supportive medications," the latest bulletin said.

Chief Minister Mamata Banerjee first tweeted her concern about Mr Bhattacharjee's health and then visited the hospital to meet his wife and daughter and offer full support. Governor Jagdeep Dhankar too visited the Woodlands hospital to enquire about the former chief minister's health.

Concerned to hear that former Chief Minister Buddhadeb Bhattacharjee has been hospitalised with breathing problems. Praying for his speedy recovery and wishing him well

Governor Jagdeep Dhankhar, who had met Mr Bhattacharjee at his home in October, also wished him a speedy recovery.

Getting update from hospital authorities.

Stating that no visitors are allowed to meet Mr Bhattacharjee, CPI(M) State Secretary Surjya Kanta Mishra said, "Well-wishers are requested to co-operate with the hospital authority for maintaining strict discipline in this regard," he tweeted.

Buddhadeb Bhattacharjee has been suffering from cardiac issues, CoPD and other old age-related ailments for quite some time.

Last year as well, he was rushed to a hospital in the city after he complained of breathing problems and his blood pressure fell drastically. His treatment has since continued at home.

Mr Bhattacharjee served as the Chief Minister of West Bengal for two terms starting 2000. In 2018, he had stepped down from the CPI(M)' s politburo, the central committee and the state secretariat.