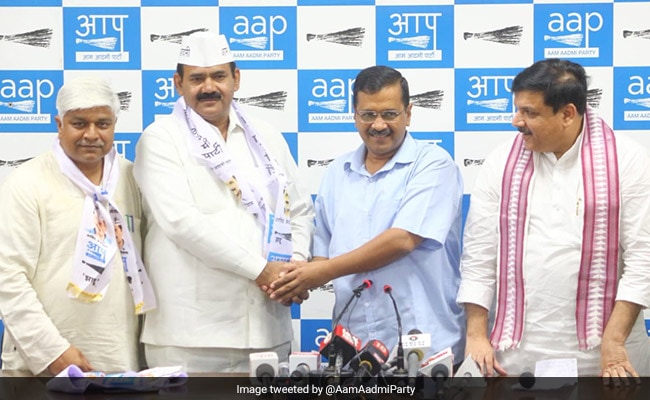 Months after crossing over to BJP from the Mayawati-led Bahujan Samaj Party (BSP), Chaudhary Surendra Kumar joined the Aam Aadmi Party in the presence of Delhi Chief Minister Arvind Kejriwal on Thursday. Mr Kumar said he decided to quit the BJP because he was "deeply affected" by the alleged demolition of the Ravidas temple in Delhi.

"Demolition of the Ravidas temple hurt my sentiments and I was very impressed by the work done by the AAP whether it was in the education sector or health. So I decided to join (the AAP)," Mr Kumar said.

Welcoming him, Delhi Chief Minister Arvind Kejriwal said that Mr Kumar has now come to the right party. He said, "We are seeing how good people from all parties are joining the Aam Aadmi Party and that is because people are very happy with the work done by us."

"Whether it is a BJP or a Congress supporter, they all have been benefited by the policies we brought in. That is why they all are extending their support to us," Mr Kejriwal said. Earlier this month, four time Congress MLA Parlad Singh Sawhney joined the Aam Aadmi Party.