"Every Father Wants It...": Ram Vilas Paswan On Son's Place In PM Cabinet

Chirag Paswan, a former actor, won in the national election for the second consecutive time from Jamui seat in Bihar 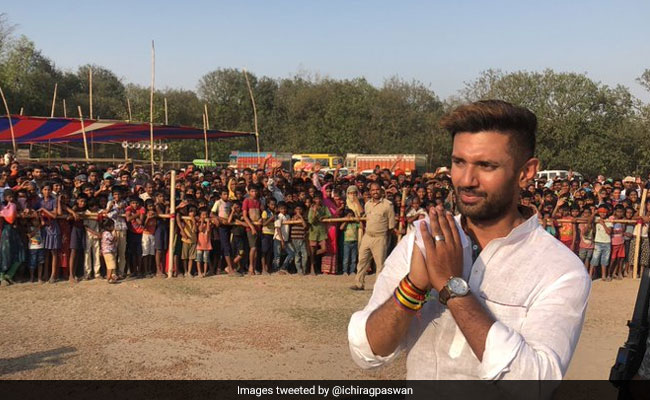 Ram Vilas Paswan's Lok Janshakti Party winning all the six seats that it had fought in Bihar in the national election has put the BJP ally in a pole position to seek for Chirag Paswan, the party chief's son, a place in Prime Minister Narendra Modi's cabinet in its second term.

Chirag Paswan won in the national election for the second consecutive time from Jamui seat in Bihar by nearly 5.3 lakh votes over his main rival Bhudeo Chaudhary of the Rashtriya Lok Samata Party.

A day before the results of the national election were announced, Ram Vilas Paswan while speaking to NDTV about the party's promises and how it planned to implement those if the LJP won, had said he would like to see his son in PM Modi's team of union ministers.

"Every father wants it. Why wouldn't I want it (his son to become a union minister)? Yes, I want it... The (LPJ's) parliamentary board chairman is Chirag Paswan. He will himself decide who will join the Modi cabinet from our party," Ram Vilas Paswan had told NDTV.

Chirag Paswan, 36, had campaigned hard in Jamui, barely stepping out of his Lok Sabha constituency. PM Modi, senior BJP leader Rajnath Singh and Bihar Chief Minister Nitish Kumar were some of the star campaigners of the National Democratic Alliance who held rallies at the constituency to endorse Chirag Paswan.

In the months leading to the national election, it was not smooth sailing between the LJP and the BJP in seat-sharing talks amid concerns raised by Ram Vilas Paswan that Nitish Kumar had kept him out of the loop.

In January, Chirag Paswan's remarks that keeping upfront "contentious issues" like the Ram temple in Ayodhya and "triple talaq" could harm the NDA's election campaign had fuelled speculations the alliance was not on the same page on important matters.

The LJP finally got the six seats as part of the NDA's formula in 40-seat Bihar after Upendra Kushwaha's Rahstriya Lok Samta Party (RLSP) left the alliance.