Events At The Border Illustrative Of A Confident India: PM Modi

In his address, the Prime Minister urged startup founders to think on how they can create institutions which can outlive this century, rather than focusing on valuations or exit strategies. 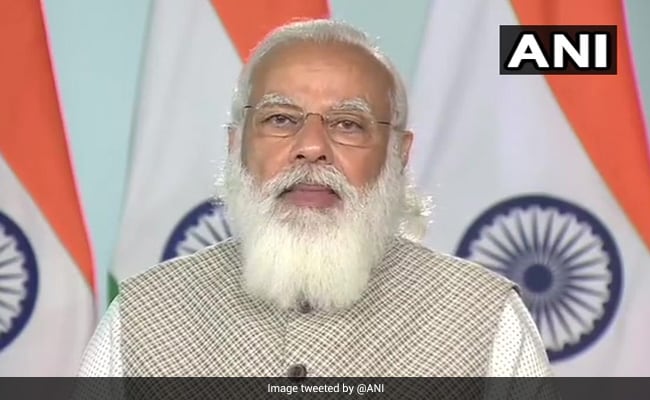 Today, India is brimming with confidence. We are seeing it on the borders, PM Modi said

India is brimming with confidence, and the events on the borders and the government's decision to liberalise geospatial data are representative of the same, Prime Minister Narendra Modi said today.

PM Modi said in the past, security considerations were the biggest red light which prevented the government from undertaking the measure to liberalise map making and access to geospatial data.

In the remarks, which come amid a slew of reports suggesting a disengagement between Indian and Chinese forces in icy heights of Eastern Ladakh, PM Modi said the confidence is a very big asset.

Today, India is brimming with confidence. We are seeing it on the borders, he said, without explicitly mentioning the thaw with China after nearly 10 months of a standoff.

It can be noted that there was a heavy troop and military hardware buildup in the Himalayan region since last summer, after China moved troops to newer grounds amid the pandemic.

One of the many confrontations turned ugly leading to deaths of soldiers in fist-fights and warning shots were also fired in another instance. The troops continued to be on vigil braving the hostile winter and according to reports, there has been a disengagement on the banks of Pangong lake and south of it.

Addressing the annual Nasscom Technology and Leadership Forum organised by the IT industry lobby grouping, PM Modi said the decision to liberalise the geospatial data and map making is not just restricted to the area of technology, nor should it be seen as another administrative reform where the government exits a particular field.

This decision is illustrative of India's capabilities. India is confident that even after this decision, we can ensure our security and also give an opportunity for the country's young population to excel at the world stage, PM Modi said.

He said the decision will strengthen the technology startup ecosystem and ensure that it can endure . It will help the IT sector and also strengthens the wider 'Aatmanirbhar Bharat' (Self-Reliant India) mission focused on self-reliance, the Prime Minister said.

He also acknowledged that many tech industry representatives and entrepreneurs had been pitching for the de-regulation in this and citing issues with red tape for long, but pointed out that the red light of security prevented movement on the same.

Our young entrepreneurs need full freedom to take advantage of the opportunities made available at the world stage. It is precisely this thinking which has led to this decision, he said, adding that the government has full faith in the citizens, startups and innovators which has led it to promote self-certification.

In his address, the Prime Minister urged startup founders to think on how they can create institutions which can outlive this century, rather than focusing on valuations or exit strategies.

He said there is a need to create world class products that will set the global benchmark of excellence, and pointed out that the domestic market of over 130 crore people is the biggest asset for the companies.

He exhorted the IT industry to focus its corporate social responsibility (CSR) efforts to develop lateral thinking in rural kids and added that the changes it will bring about can prove to be a game changer for India.

The Prime Minister said the country is not short of ideas, but needs mentors to help turn ideas into reality in its path of progress.

PM Modi said he will personally ensure that the targets on optical fibre cable laying will be met, but urged the IT industry to develop solutions for societal good which leverage on the wide network.

PM Modi lauded the IT industry for its work during the pandemic and also for ensuring that it has grown by over 2 per cent to USD 194 billion in FY21.

When the chips were down, the Indian IT industry's code kept things running. It has done wonders during the pandemic, PM Modi said.

He said in the past, the Indian IT industry could not take advantage of a lot many aspects because of the regulations and the digital divide kept widening as a result of it.

Acknowledging that leaders of tomorrow cannot flourish under restrictions, Prime Minister Modi said the National Digital Communication Policy is an attempt to make India into a global digital product hub.

Appreciating the work done by fintech companies, he said the JAM (Jandhan, Aadhar and Mobile) trinity has ensured a shifted from being a cash economy to a less cash economy and added that digital technologies has reduced black money problems.

The technological interventions are helping us deliver on the promise of minimum government and maximum governance, he said, and also added that the world is now looking at India with a lot of hope and confidence levels which are higher.