The EU MPs met Prime Minister Narendra Modi and National Security Adviser Ajit Doval on Monday. Four of the 27 lawmakers dropped out of the Kashmir visit amid the backlash.

A group of European Union MPs visited Jammu and Kashmir on Tuesday with the opposition raising questions about foreign lawmakers being allowed in the state when Indian political leaders had been barred or turned away from the airport. This is the first such international visit since the government ended special status to Jammu and Kashmir and split it into two union territories in August.

The MPs met Prime Minister Narendra Modi and National Security Adviser Ajit Doval on Monday. Four of the 27 lawmakers dropped out of the Kashmir visit amid the backlash. The lawmakers are mainly from far-right parties; only three of the 27 MPs belong to the Left or liberal parties. All of them are visiting India in their private capacity.

Visuals showed the group driving through heavily guarded Srinagar, their drive taking them past four detention facilities where dozens of politicians including three former chief ministers have been detained.

The EU MPs were taken to the Army Headquarters, where they were briefed on the security situation. They also met members of the BJP. Top police and civil officials told the lawmakers that the people have been yearning for peace but the terrorists have been continuously threatening them.

During an interaction, police chief Dilbag Singh said in the last 84 days, not a single life has been lost, reported Press Trust of India. But there have been 98 incidents of terrorists intimidating people and more than 350 times, terrorists threatened people through posters, the officers said, PTI reported.

But many alleged that no prominent civil society group, trade body or mainstream Kashmiri political party could meet the delegation. 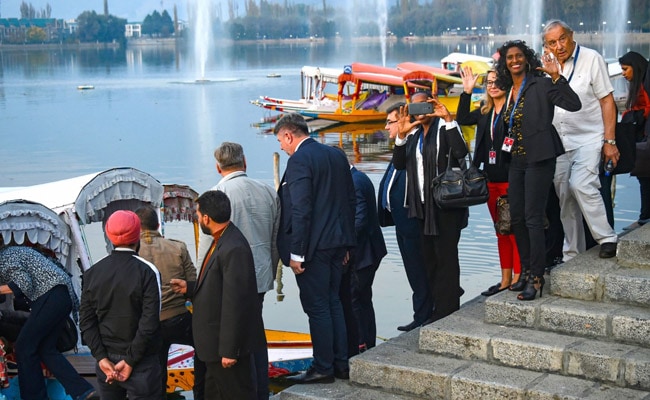 The lawmakers' visit ended with a trip to Dal Lake, Srinagar's most prominent tourist draw. (PTI)

Two MPs of National Conference said they were blocked from meeting the group.

The visit ended with a trip to Dal Lake, Srinagar's most prominent tourist draw, where the MPs were seen taking a boat ride.

"The visit is good and we have come to know about the situation in Kashmir. This is a first-hand experience and we loved the interaction with local public here," Virginie Joron, a EU parliamentarian from France, was quoted as saying by PTI.

Ahead of the visit, Thierry Mariani, a Euro MP for France's far-right National Rally, was quoted as telling Agence France-Presse (AFP), "we are going to see the situation in Kashmir, at least what they want to show us".

Another MP, Chris Davis, claimed he was dropped from the trip because he asked for unfettered access in Kashmir. The Liberal Democrat MP said he had asked to be allowed to move around without security escort and speak to anyone, to make his own assessment about the situation. "I am not prepared to take part in a PR stunt for the Modi government and pretend that all is well. It is very clear that democratic principles are being subverted in Kashmir, and the world needs to start taking notice," Mr Davies said.

AFP reported on Monday that the European parliament and European Union hierarchy were not involved in this visit.

The European Union parliamentarians visited Jammu and Kashmir on a day when five labourers from West Bengal were killed by terrorists in Kulgam district. Another labourer was injured in the attack.

After the MPs met PM Modi on Monday, a statement from his office said, "Their visit to Jammu and Kashmir should give the delegation a better understanding of the cultural and religious diversity of the region of Jammu, Kashmir and Ladakh; apart from giving them a clear view of the development and governance priorities of the region."

Opposition leaders like Rahul Gandhi have slammed the visit. The Congress leader, who was turned away from the Srinagar airport in August, tweeted: "MPs from Europe are welcome to go on a guided tour of Jammu and Kashmir while Indian MPs are banned and denied entry. There is something very wrong with that."