The Union Health Ministry had classified four districts of Jammu and Kashmir - Srinagar, Bandipora, Anantnag, and Shopian -- in the red zone. 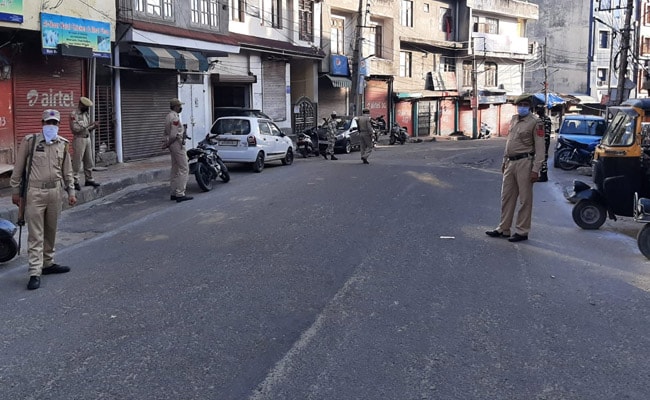 COVID-19 Red Zone: 3 districts of Jammu, Samba and Kathua are in red zone, it said. (File)

The Jammu and Kashmir administration has declared the entire Kashmir valley and three districts of the Jammu region as "red zone" based on an overall assessment of the coronavirus situation and expected movement of stranded persons to the union territory.

The classification of districts was given in an order issued by Chief Secretary BVR Subrahmanyam on Sunday night.

The Union Health Ministry had classified four districts of Jammu and Kashmir - Srinagar, Bandipora, Anantnag, and Shopian -- in the red zone.

The Centre has allowed the administration of States and Union Territories (UTs) to classify additional districts as red or orange zones. However, States and UTs are not allowed to lower the zone classification of a district.

As per the order issued by the Jammu and Kashmir administration, the entire Kashmir valley, which comprises ten districts has been declared as the red zone.

In Jammu region, three districts of Jammu, Samba and Kathua are in the red zone, it said.

While four districts of the Jammu region - Udhampur, Reasi, Ramban, and Rajouri - are in the orange zone, Doda, Kishtwar, and Poonch are in green zone.

The other guidelines issued by the chief secretary were more or less based on the MHA order issued on May 1 for the third phase of lockdown from May 4 to May 17.

As per the guidelines, the government has allowed movement of individuals in vehicles only for permitted activities, with a maximum of two passengers, besides the driver in four-wheelers, and with no pillion rider in case of two-wheelers.

"Intra-district movement of individuals is also allowed in orange zone in individual vehicles with similar restriction of passengers in four and two-wheelers, on the basis of passes issued by the district authority.  Taxi and cab aggregators are permitted to ply with one driver and two passengers only while e-commerce activities (home delivery etc) are permitted for essential services and goods," the order said.

"Private offices can operate with up to 33 percent strength as per the requirement with remaining persons working from home," the order said.

In green zone districts, all activities which are permitted in the orange zone will be allowed, it said.

Other activities permitted in green zones included the opening of all shops except those prohibited across the Union Territory.

The activities which will remain prohibited in the entire UT include all domestic and international air travel of passengers, except for medical services, air ambulance, security purposes, or for purposes permitted by the Ministry of Home Affairs.

All schools, colleges, universities, educational and training coaching institutions, etc. will also remain closed across the UT till March 17 but online and distance learning will be permitted.

All passenger movement by trains, except for security purposes or for purposes permitted by the MHA will remain prohibited, the order said.

The movement of individuals for all non-essential activities has been prohibited between 7 pm and 7 am.

The order said district magistrates will issue specific prohibitory orders under Section 144 of CrPC. However, persons above 65 years of age and those with co-morbidities, pregnant women, and children below the age of 10 years will stay at home except for meeting essential requirements or for health purposes.

"All social, political, sports, entertainment, academic, cultural, religious functions and other gatherings will remain prohibited in the entire UT. All religious places and places of worship will be closed for the public. Religious congregations are strictly prohibited," it said.