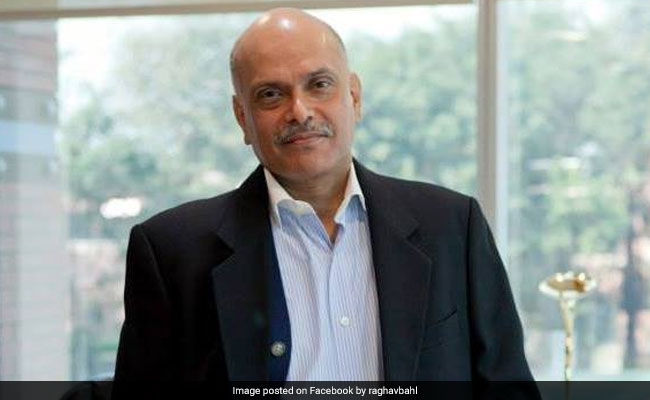 Media owner Raghav Bahl has been accused of money laundering in a case filed by the Enforcement Directorate on Friday. The case is based on the Income Tax department's complaint alleging that Raghav Bahl understated the value of investment of a London property by around GBP 2.73 lakh (approximately Rs 2.45 crore) and failed to satisfactorily explain the source of investment.

"The agency has registered a case against Bahl on the basis of the IT department reports regarding money laundering," a senior ED official was quoted by news agency IANS.

Mr Bahl, who last week released a statement on the IT department chargesheet, responded by writing a letter to Finance Minister Nirmala Sitharaman, in which he said he is "getting the sense of being hounded for doing no wrong despite paying all taxes honestly and diligently".

In his letter, he wrote, "I have, as far back as May 13, 2019, through my authorised representative, provided full details relating to the amount of GBP 2.73 lakh paid to buy a property in London. I clarified these details after the Income Tax Department claimed that I allegedly failed to disclose information about this payment, as a result of which they have presumed the amount to arise from proceeds of undisclosed income (black money), as per two show cause notices served to me by email in the afternoon of May 1, 2019."

In the statement released last week Mr Bahl said he strongly contested the government's claim and had made all necessary disclosures regarding his investment and transactions in his income tax returns (ITR).

Mr Bahl, whose home and the office of his news portal "The Quint" in Noida were raided by IT officials in October, had at that time issued a statement giving details of the assets, attacking what he called a "blatant attempt" by the "government's spin-masters".

Giving details of the assets, he said his flat in London was part of legally permitted Liberalised Remittance Scheme, which currently stands at $250,000 per family member per year, which has been declared in their income tax filings.

According to a FAQ section on the Reserve Bank of India (RBI) website, "Under the Liberalised Remittance Scheme, all resident individuals, including minors, are allowed to freely remit up to USD 250,000 per financial year (April - March) for any permissible current or capital account transaction or a combination of both."

The Editors Guild of India had expressed its concern over last year's raid in a statement that said, "While the tax administration is within its rights to make inquiries in compliance with the relevant laws, it should not exercise those powers in a way that could be seen as intimidation of the government's critics."

BJP leader and Union Minister Ravi Shankar Prasad had said on the raid, "We believe in freedom of press and democratic values. If any media house is involved in corruption, they have to answer."

Raghav Bahl, one of the biggest names in Indian media, is the founder of The Quint and the Network18 group.