Ahead Of French President's Visit, Indo-French Club Launched In Varanasi

The club has started special programmes which will continue till March 12, the day PM Narendra Modi and Emmanuel Macron are scheduled to arrive here. 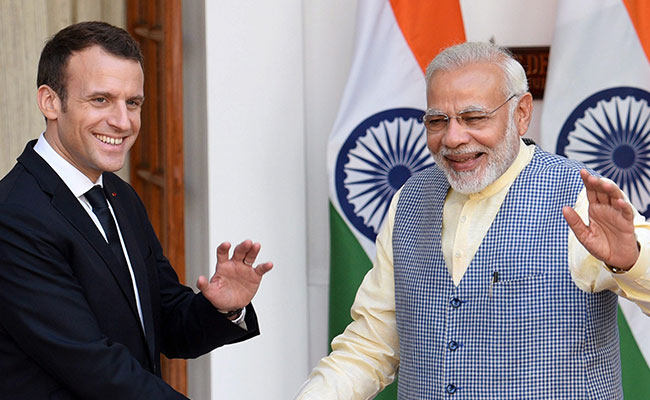 Varanasi: Ahead of the proposed visit by French President Emmanuel Macron and Prime Minister Narendra Modi to Varanasi, a group of local youths and some French nationals have formed a club to work towards improving man-to-man contact between the people of the two countries.

The 'Indo-French Friends Club' was launched at Assi Ghat on Thursday.

"The idea of getting the nationals of both the countries together for improving personal contact just took shape and we gave it the form of Indo-French Friends Club," the convenor and founder of the club, Uttam Ojha, told PTI.

Mr Ojha said Varanasi is a place where nationals of several countries stay for long durations to understand the old city.

"Same is the case with the French nationals who frequent the city for their spiritual pursuits. We have come together to have a common platform with them to share our history, culture, arts and food," Mr Ojha said.

The club has started special programmes which will continue till March 12, the day PM Modi and Mr Macron are scheduled to arrive here.

The two leaders would have a boat ride on "Kailasha" from Assi to Dashaswamedh ghat, a distance of about 500 metres, Mr Ojha said.

"It will be a one-to-one conversation between the two leaders and this is what we are striving for also for the nationals of both the countries for a better understanding of each other's viewpoint," he said.

"Later, more programmes on academics, art and cultural activities will be organised," he added.

A programme to felicitate French nationals living in Varanasi for some time and serving the people is scheduled at the French Study Centre at the BHU.

"One such French national is Mustafa who has been coming here regularly since 1982. There is another lady who is working for the underprivileged," Mr Ohja said.

Along with such people, the locals will strive for coordination at the social, cultural, literary and spiritual levels.

"The club will open a similar centre for facilitating the visit of French tourists arriving here in the future," he said.
Comments
Emmanuel MacronNarendra ModiIndo-French Friends Club