Read inOther Languages
This Article is From Apr 29, 2019

In Bengal, Poll Violence Near Tagore's Shantiniketan, "Abode of Peace"

In Birbhum district, where the constituencies of Bolpur and Birbhum are voting, reports of clashes came from Nanoor - a village not far from Shantiniketan, the "Abode of peace" set up by Rabindranath Tagore. 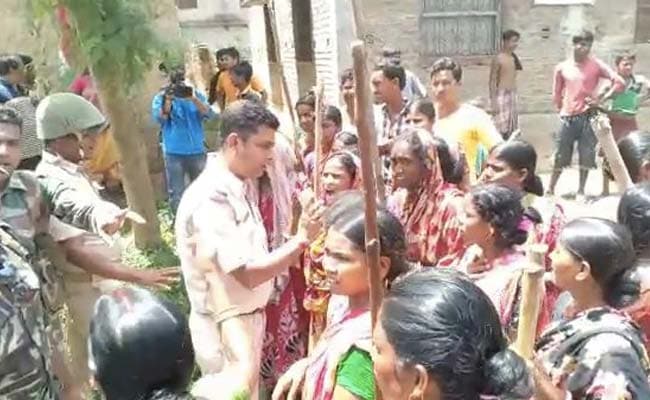 People protested after they were allegedly prevented from going to cast their vote.

Sporadic clashes and irregularities took place during polling in Bengal, where voters are taking a decision on eight seats today. The worst of these was in Nanoor in Birbhum, a district in the north-western part if the state, in which one person was allegedly injured. In Asansol, the seat of Union Minister Babul Supriyo, the minister's car was vandalised.

The BJP has filed a complaint with the Election Commission about the violence in the state and alleged several instances of booth capturing. The Trinamool too, has complained to the Commission, alleging "illegal action of central forces" and violation of the Model Code of Conduct by BJP candidates in Bengal. "There were various instances where on instructions of BJP leaders, Central Forces acted in a manner which is not conducive to free & fair elections in WB," the party said in a letter.

In Birbhum district, where the constituencies of Bolpur and Birbhum are voting today, reports of clashes came from Nanoor - a village not far from Shantiniketan, the "Abode of peace" set up by Rabindranath Tagore.

Armed with bamboo sticks, men and women held protests after they were allegedly prevented from going to cast their vote by workers of the ruling Trinamool Congress. The BJP supporters claimed they were stopped and intimidated by Trinamool supporters.

A huge security contingent -- including a number of Central forces personnel -- arrived at the village and was trying to calm things down when reports last came in.

Videos from the area showed a huge crowd of -- mostly women armed with bamboo sticks -- raise slogans. They complain to the policemen stationed there about one person having his arm broken.

Birbhum district is the stronghold of Anubrata Mondal of the Trinamool Congress. The Election Commission had put him under surveillance last evening and seized a cellphone belonging to him.

Mr Mondal was unfazed. "The seizure of a phone doesn't make any difference to me and the surveillance is of no use," he told reporters.

Another candidate of the BJP has been issued notice by the Election Commission for using cellphone inside the poll booth. Kalyan Choubey is contesting from Krishnanagar, one of the eight seats going to polls today.

Mr Mondal  appealed to the High Court today, asking that the surveillance ordered by Election Commission is unconstitutional and be removed or put on hold. The court refused to pass any Interim order, saying this is the Election Commission's business and they must have worked on the basis of information received. Asking for affidavits, the court said it would hear the case after three weeks.

Babul Supriyo said he would be on the road and visit every polling station where trouble was reported. "I will take central forces with me. People are saying give us central forces, let us vote," he alleged.

Officials of the Election Commission said by and large, polling has so far been peaceful. "There are reports of small incidents of violence from some booths which were addressed immediately.

Our officials and forces are monitoring the situation in Asansol," an official was quoted as saying by news agency Press Trust of India. "We have sought a report from the presiding officer about what Babul Supriyo was doing inside the booth," he added.