While it was the BJP's best-ever performance in Haryana, carved out as a separate state in 1966, the Congress faced a rout after a gap of 20 years, as per results declared by the Election Commission. 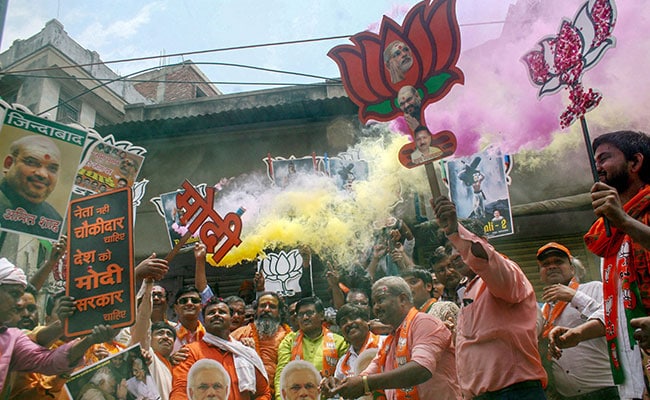 In 2014, the BJP had won seven of the eight seats it contested. (File)

The ruling BJP has won all the 10 seats in Haryana. The results of Rohtak and Faridabad seats were declared early today morning.

While it was the BJP's best-ever performance in Haryana, carved out as a separate state in 1966, the Congress faced a rout after a gap of 20 years, as per results declared by the Election Commission.

In 2014, the BJP had won seven of the eight seats it contested, while the INLD had won two and Congress one.

Deepender, who was the sitting MP from Rohtak, lost to Arvind Sharma, a former Congress MP who had joined the BJP recently, by a margin of 7,503 votes.

It was not only Rohtak, the BJP also managed to smash the bastions of the Chautala and Bhajan Lal clans.

The BJP had replaced its Karnal MP Ashwini Kumar Chopra with Sanjay Bhatia and its rebel MP Raj Kumar Saini from Kurukshetra with Minister in the Khattar government Nayab Singh Saini.

In the 2019 election, the Modi juggernaut continued propelling the ruling BJP in Haryana to the top spot. Many exit poll projections for Haryana also proved right as they had forecasted a stupendous performance by the BJP.

Of the 11 women in the fray out of a total of 223 candidates, only BJP's Sunita Duggal managed a win from Sirsa reserved seat from where she defeated state Congress chief Ashok Tanwar by a margin of 3,09,918 votes.

BJP's local leader from Panipat and state general secretary Sanjay Bhatia surprised many with his massive win from Karnal seat by a margin of 6,56,142 votes over his nearest rival and sitting Congress MLA Kuldeep Sharma.

Another Union minister in contest Rao Inderjit Singh retained his Gurgaon seat, winning by a margin of 3,86,256 votes over Congress' Ajay Singh Yadav. Among the major upsets for the Congress was former Haryana CM Bhupinder Singh Hooda losing from Sonipat to BJP's sitting MP Ramesh Chander Kaushik by 1,64,864 votes.

Among other senior Congress leaders who lost included Kumari Selja, who went down to sitting MP Rattan Lal Kataria from Ambala reserved segment.

Congress'' three-time MP Deepender Hooda was the only candidate who remained in a neck-and-neck fight from the Rohtak seat right till the end, but his loss in the end dashed Congress' hopes.

Parties like the INLD, JJP-AAP and BSP-Loktantra Suraksha Party alliance, too, had to bite the dust at the hustings.

However, comparatively the BSP and JJP performed better than INLD and AAP.

The BJP's great show saw its vote share surge in comparison to the 2014 Lok Sabha polls. As per the results declared, the BJP's vote share was 58.02 per cent as against Congress' 28.42 per cent. INLD, which was decimated, had a vote share of 1.89 per cent.

The BJP in Haryana continued its winning momentum from previous elections, something which is likely to come as a boost to party's prospects in the assembly polls, which are due in October.

Sitting MP from Hisar Dushyant Chautala, great grandson of Devi Lal, who had launched JJP after a vertical split in INLD owing to a family feud, lost to BJP''s Brijendra Singh, bureaucrat-turned-politician and son of Union minister Birender Singh.