The Prime Minister said the practice of instant triple talaq has been abolished in several Muslim countries of the world. 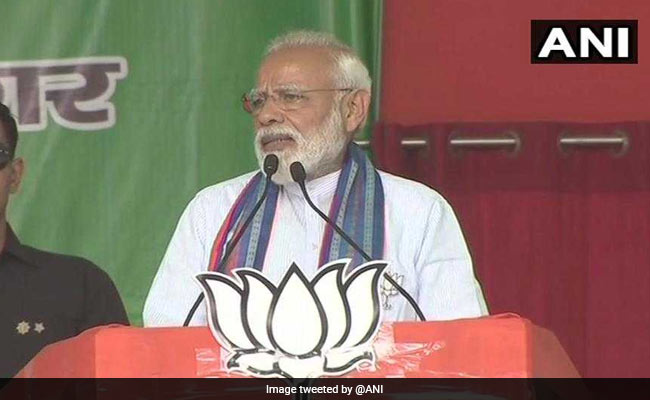 These mahamilawati people are working day and night to stop the anti-triple talaq law: PM Modi

Prime Minister Narendra Modi today targeted the opposition parties over the issue of instant triple talaq, saying the Congress and its allies were working overtime to stall a bill against the practice, but vowed to ensure they don't succeed.

Addressing a rally at Bhadohi, which has a sizeable Muslim population and goes to the polls on May 12, PM Modi accused the Congress and its partners of "compelling" Muslim women to live in fear.

The Prime Minister said the practice of instant triple talaq has been abolished in several Muslim countries of the world.

"Their daughters' lives are not destroyed in the name of triple talaq. We want to give the same rights to our Muslim sisters in India," he said.

The Modi government introduced a bill to ban the practice of talaq-e-biddat or instant triple talaq and it was passed by Lok Sabha. But it lapsed in the Upper House.

"The Congress and its allies are compelling the sisters, whose lives have been destroyed because of instant triple talaq, to live in fear. These mahamilawati people are working day and night to stop the anti-triple talaq law. But I will not allow them to succeed," PM Modi vowed.

He also said India's point of view is being accepted world across and the country gets respect everywhere.

"From Saudi Arabia to the United Arab Emirates and from the Philippines to Russia, every country is bestowing its highest honour on India.

"When you get these news, do you feel proud? Don't you hold your head high? Doesn't your chest swell with pride," he told the audience.

Countries such as Russia, Saudi Arabia and the UAE have conferred their highest civilian awards on PM Modi.

Referring to terror attacks, PM Modi said whenever any such incident takes place the pain is felt across the country.

"When any terror attack takes place in Kashmir, tears are shed in Bhadohi, the heart of people goes out in Kanyakumari. Everybody feels the pain. When bodies of martyred soldiers are brought at their native place draped in tricolour, everybody feels that they have lost their own son."

"But in retaliation, when there is a surgical strike, don''t you feel proud? Now do you feel that there is the right government (in place) and it''s working properly?" he asked.

"India shot down a satellite with a missile, how did you feel? This is the strength of the country. Did any country in the world oppose us or impose sanctions?" he asked.

"When you work with the right policy and intention, keeping the welfare of the people in mind, even impossible becomes...," to which the crowd replied, "possible".

PM Modi also said hundreds of Indians lodged in jails in Saudi Arabia are being sent home by that country before Ramzan after he requested Saudi Crown Prince to free them.