Election Results: Can't Show I Cast My Vote For Me, Will File Complaint: TTV Dhinakaran

Candidates from TTV Dhinakaran's party, the AMMK, failed to win a single seat in Lok Sabha polls, with some even forfeiting their deposits; this means they secured less than 16.66 per cent of the total votes polled in that constituency 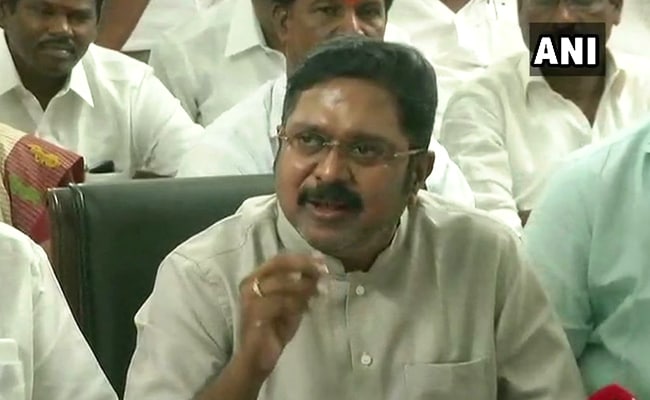 Tamil Nadu state legislator TTV Dhinakaran today said he would file a complaint with the Election Commission over non-registration of votes for his party, the Amma Makkal Munnetra Kazhagam (AMMK), during recently concluded Lok Sabha and Assembly polls in the state. "If in a particular booth if we got zero votes, are you telling me that even our party workers did not vote for us?" he asked, according to a report by news agency ANI.

AMMK candidates had failed to get even a single vote in Avadi and Madhavaram seats and failed to win a single seat in Lok Sabha polls, with some even forfeiting their deposits. The party's total vote share was less than five per cent.

The AMMK leader, who founded the party after being expelled from the ruling All India Anna Dravida Munnetra Kazhagam (AIADMK), said details were being collected and would shortly be presented to the poll body.

"In a booth, I have at least 100 people who are associated with me, my family, my friends, my associates, we got just 14 votes.Only the Election Commission can answer this questio," he said,

"How can I even go to the court, because what evidence can we have to claim that people or even I caste my vote for my party?" the lawmaker asked.

Mr Dhinakaran's comments come after the Dravida Munnetra Kazhagam (DMK), the party which claimed a near-clean sweep of Lok Sabha seats winning 23 of 28 polled, called on the Election Commission to explain the suspicious moving of EVMs and VVPAT machines in the Theni and Erode constituencies.

Several other opposition parties, including the Congress, expressed similar concerns regarding EVM movement and storage across the country the day before counting and kept all-night vigils outside store rooms.

The AMMK was also in the news the day before polling in the south Indian state, when unaccounted cash worth 1.48 crore, allegedly meant to bribe voters, was seized by taxmen during raids on a party colleague of Mr Dhinakaran in Andipatti.

Tamil Nadu voted in parliamentary and assembly polls on April 18.

Party leader Thanga Tamilselvan, whose disqualification as the legislator from the Andipatti Assembly constituency necessitated the by-poll, dismissed links to the seized amount, saying, "People know it, this is a drama planned and enacted by the AIADMK."

Mr Tamilselvan contested, and lost, the Lok Sabha election from the Theni seat.

The raid in Andipatti took place hours after the poll body cancelled voting in the parliamentary constituency of Vellore, over a massive amount of cash seized from the warehouse of a DMK candidate.3

According to data from the Election Commission, as of April 24, 229.74 crore in cash had been seized by officials, which was, by some distance the most; the next highest was 140.78 crore seized in Andhra Pradesh.