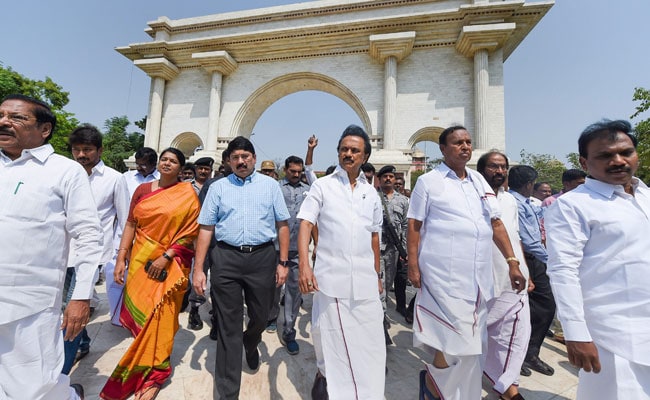 Dravida Munnetra Kazhagam (DMK) chief MK Stalin on Saturday had a tacit but tough message for the BJP government at the centre, telling Prime Minister Narendra Modi's party "gone are the days Hindi-speaking states alone constituted India". He also said "constructive politics ought to be the norm in times ahead".

The DMK leader orchestrated a stunningly successful Lok Sabha election campaign in Tamil Nadu, leading his party to victory in 37 of 38 seats; polling in Vellore, the state's one remaining seat was postponed after the recovery of large stores of cash.

"State-centric constructive politics ought to be the norm in times ahead. No government at centre can ignore any state. Gone are the days Hindi-speaking states alone constituted India. It's time to embrace and carry along all states," Stalin, who was formerly Deputy Chief Minister, said.

Stalin's comment comes as party workers express disappointment. They feel that the DMK's excellent performance in the polls was not helped by the poor performance of its national ally - the Congress - across other states.

The grand old party has been decimated by the BJP across large swathes of the country and wiped out entirely in 17 states and Union Territories. They did, however, manage to win eight of the nine seats the DMK gave them in Tamil Nadu.

DMK leadership feels Congress's poor national showing means they will now have to work with hostile governments at both the Centre and State levels. They feel that if the Congress had won a majority, they would have been better placed to deliver on election promises.

However, in assembly by-polls for 22 seats that were held concurrently to parliamentary elections, the AIADMK managed to win enough seats - nine - to retain control of the state and quash Stalin's Chief Ministerial ambitions.

Undaunted, Stalin also said, "DMK will be people's voice for welfare and rights in the parliament and Tamil Nadu Assembly."

The AIADMK has 123 seats, which is six above the simple majority mark of 117.

The DMK, under Stalin, had been supportive of both the Congress and Mr Gandhi, pitching the latter as his party's Prime Ministerial nominee despite Telangana Chief Minister K Chandrasekhar Rao's late bid to revive the long-standing idea of a "Third Front" - one minus both the BJP and the Congress.

However, Stalin's push for Mr Gandhi wasn't well received by potential allies on the national front, such as Bengal Chief Minister Mamata Banerjee and former Uttar Pradesh Chief Minister Mayawati, neither of whom chose to ally, at least openly, with the Congress-led United Progressive Alliance (UPA).

Following the DMK-led Secular Front's landslide win, Stalin said the DMK would also take the Tamil Nadu strategy of battling forces of communal disharmony to other states, saying, "We ought to be vigilant against divisive forces rising."