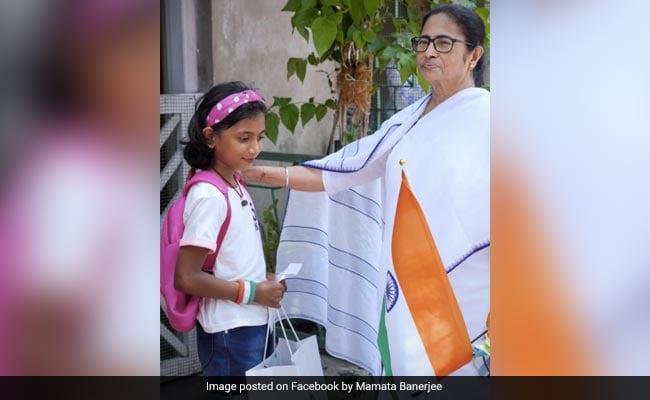 An eight-year-old girl from West Bengal's Malda district travelled to Kolkata on Thursday to meet Chief Minister Mamata Banerjee and thank her for various state-run welfare schemes such as Kanyashree and Sabuj Sathi.

She was earlier planning to pedal around 350 km from her hometown to the state capital but officials convinced her and her parents to take the train instead.

From there, she rode a bicycle to the chief minister's residence in Kalighat area and presented her with a gift of 'special mango pulps and pickles'.

"I am so happy to meet the CM. I am grateful to her. It is because of her that we have schemes such Kanyashree and Sabuj Sathi due to which I and my sisters are able to continue our studies. I want to see our CM as the next prime minister in 2024," Ms Das told reporters after meeting Banerjee.

She said that her two sisters had to earlier stop their studies due to poor financial condition of their parents and because of Kanyashree, they could continue their studies and are now pursuing higher education. Ms Das said that she and her sisters were benefited by the bicycles they had received under the Sabuj Sathi scheme.

The chief minister later described Ms Das as the 'pride of Bengal' and said young girls like her would take the state to greater heights and they should be nurtured.

In a Facebook post, Ms Banerjee said, "Pride of Bengal! I am delighted to meet with Sayantika who came all the way from Malda, along with her parents. She and her sisters have benefitted from several GoWB flagship schemes like Kanyashree and Sabooj Sathi. Young girls like her will take Bengal to greater heights and we must keep nurturing them, ensuring that all their dreams come true. I wish her the very best for all her future endeavors."

A senior official in the chief minister's office (CMO) said Ms Das's parents were contacted after officials came to know of the girl's plans to ride a bicycle all the way from English Bazaar town in Malda district to Kolkata, around 350 km away, to meet the chief minister and requested them to take a train instead.

"We came to know that the little girl was planning to pedal from Malda to Kolkata. We contacted her parents on Wednesday and requested them to take a train instead," he said.

Introduced in 2012 by the Mamata Banerjee government, the Kanyashree Prakalpa aims to prevent school dropout and early marriage of girls by providing financial assistance to economically backward families.

The scheme has received national and international awards, including the United Nations Public Service Award, 2017.

Under Sabuj Sathi, the state government provides bicycles to students ensure their easy access to schools.