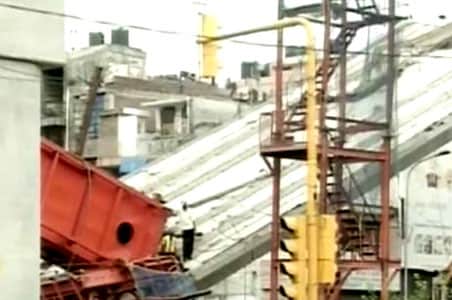 "I take full moral responsibility for the accident. As head of the organisation, I have to take the responsibility," said Sreedharan, adding that this is the worst accident in the history of Delhi Metro.

He also said that the accident has caused a damage of Rs six crore.

Sreedharan submitted his resignation to Delhi Chief Minister Sheila Dikshit after visiting the site of the accident. However, sources in the CM office have said that the resignation won't be accepted in a hurry.

The DMRC has set up a five-member committee to probe into the mishap.

Meanwhile, the Delhi Chief Minister visited AIIMS to meet the injured. She has announced compensation of  Rs 5 lakh for the families of those who died, Rs 2 lakh for those with serious injuries and Rs 50,000 for those with other injuries.

About 30 workers were at the site when the mishap occurred. One of the pillars broke, leading to the collapse of the concrete slab. A water pipeline also burst as the heavy slab fell on it.

Police, fire brigade and ambulance are at the spot and rescue operation is being carried out.

In a similar incident in October 2008, two people died and 16 were injured when a portion of the an under-construction bridge collapsed and fell on a bus on east Delhi's busy Vikas Marg.

Delhi Metro Rail Corporation blamed the contractor Afcons Infrastructure for the accident but the contractor wasn't changed as DMRC said that would mean major delays.

The company said it had put many more safety measures in place after this incident.

Some of other major metro-related accidents in the past:

Promoted
Listen to the latest songs, only on JioSaavn.com
On July 18, 2008: A faulty crane at a metro construction site dropped a four-ton iron beam on a passing car and injured two people.