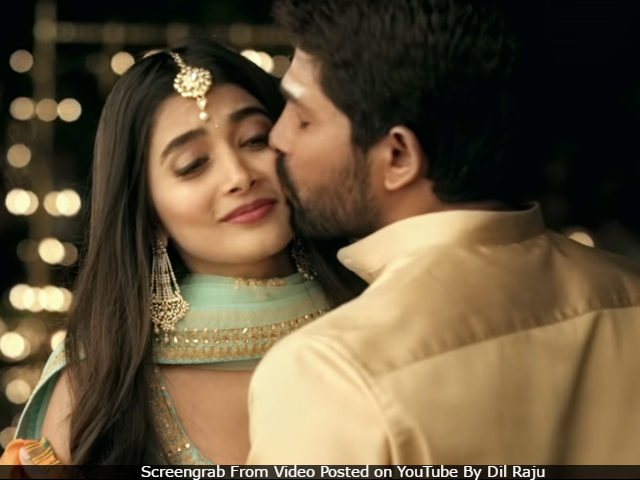 New Delhi: The first trailer of Telugu superstar Allu Arjun's much-anticipated film Duvvada Jagannadham (DJ) is finally out. Allu features opposite Pooja Hegde in the film. In the trailer, the 34-year-old actor initially stars as a Brahmin cook while in the later part, he is seen as a stylish young man, who would go against all odds to complete his mission. Allu, as a Brahmin cook, falls in love with Pooja, who plays a modern girl. Duvvada Jagannadham is about Allu and Pooja's love story. The film also promises to be action-thriller. Duvvada Jagannadham is directed by Harish Shankar, who has earlier made films like Gabbar Singh and Ramayya Vasthavayya.

Watch the trailer of Allu Arjun's Duvvada Jagannadham here. The trailer, which was unveiled on Monday night, has so far been viewed over 3 million times.


Duvvada Jagannadham is Pooja Hegde's third Telugu film. The actress debuted in Bollywood in 2016 with Hrithik Roshan's Mohenjo Daro. Pooja shared the trailer on Twitter and wrote, "My next Telugu film #DJ..Here's a glimpse of it...tick tock. Enjoy."

Promoted
Listen to the latest songs, only on JioSaavn.com
Meanwhile, Times Of India reports that the film has allegedly hurt the sentiments of the Brahmin community. The protesters allege that the community has been portrayed in a negative light in the song Gudilo Badilo. "These days, filmmakers are showing the Brahmin community in a very negative and poor light. In DJ, they have taken the words from Lord Shiva's recital 'Namakam Chamakam', and made a pun on it. We will not tolerate this," TOI quoted Dronamraju Srinivasa Rao, President of the All India Brahmin Federation as saying. Later, director Harish Shankar met the protesters and reportedly agreed to remove those lines from the song.

Duvvada Jagannadham, produced by Dil Raju, is scheduled to release on June 23.