BJP claims Trinamool is opposed to the move because it used Durga Puja funding to convert black money into white.

Politics has muscled its way into Durga Puja pandals in West Bengal ahead of festivities barely 50 days away. On orders from Mamata Banerjee, top women leaders of the Trinamool Congress sat on a day-long sit-in protest  in Kolkata today to protest income tax notices to Durga Puja organisers.

BJP claims Trinamool is opposed to the move because it used Durga Puja funding to convert black money into white.

But Trinamool accuses BJP of tax terrorism because the party "tried and failed to capture" Durga Puja committees in the city.

Kollkata Mayor Firhad Hakim who is also a senior minister in the Mamata Banerjee government showed up at today's protest that was held under the banner of Banga Janini Brigade, a cultural women's front floated by Mamata Banerjee. Mr Hakim organizes a big Durga Pujas in the city.

"They are trying to abolish the Durga Pujas because Mamata Banerjee has made such a global success of it," Mr Hakim said. 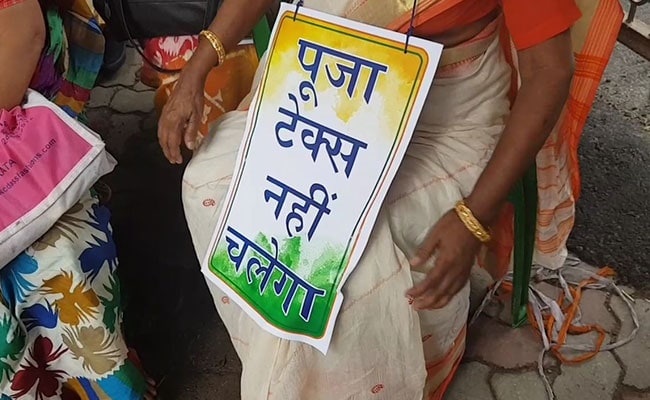 Trinamool accuses BJP of tax terrorism because the party "tried and failed to capture" Durga Puja committees in the city.

Dr Shashi Panja, women and child welfare minister minister said, "The BJP went to puja committees and tried to muscle their way into them, offering large sums of money. When that did not work, they deployed the income tax department to harass the organisers."

As a matter of fact, there were reports of a tussle between the BJP and Trinamool for control of a Durga Puja committee in Bhawanipore, Mamata Banerjee's own assembly constituency. The Trinamool won that round.

"In case, the IT department has only said the puja committees should submit source of income and expenditures. What's wrong with that? Puja committees are not being asked to pay tax.

A fresh twist is Income Tax department's tweeted saying it has not issued any tax offices to Durga Pujas Committees this year.

But 40-odd puja panels claim they have got Income Tax notices seeking details of payments and tax deducted at source. Some of them got the notices last year and some have got summons recently.

Among them is Shyamal Das, member of the Azad Hind Sarbojonin Durgotsav Committee at Hedua in north Kolkata. "Why is Income Tax calling me? Why? Why? Why? What income am I making? Why should I be called? Where is the black money? There is no questioning of making profit from Durga Pujas. So why should I pay tax?" he said.

Around 28,000 images of Goddess Durga are worshipped across Bengal each year, 3000 of them are in Kolkata. 1500 or so are of reasonable size. Pujas with budgets of over Rs 1 crore number 20 at most, say sources and many of them pay tax. The taxman's summons will hurt the small guys the most. And that is casting a cloud.