Due To Use Of Technology, Centre "Saved Rs 2 Lakh Crore": Finance Minister

Nirmala Sitharaman was speaking at a lecture series on 'Economic Potential of Bharat in Global Scenario of the 21st Century' organised here by the Dattopant Thengadi Research Institute. 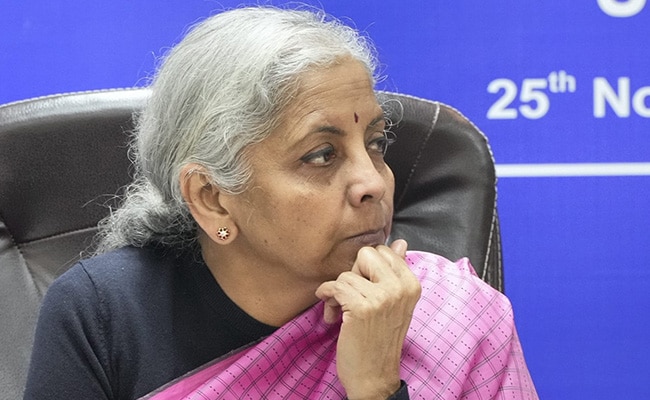 During Congress rule, money used to go into the accounts of the dead, Nirmala Sitharaman said.

She was speaking at a lecture series on 'Economic Potential of Bharat in Global Scenario of the 21st Century' organised here by the Dattopant Thengadi Research Institute.

"Due to the use of technology, we have saved Rs 2,00,000 crore. The money under DBT is reaching directly into an Aadhar-verified account with no possibility of fraud," she said.

During the Congress rule, money used to go into the accounts of the dead, non-existent persons, and even the unborn ones, she said Talking about climate change, Ms Sitharaman said the developed countries have been emitting carbon dioxide and other pollutants since the industrial revolution began centuries ago, but when countries like India tried to march ahead, "they told us not to emit carbon and control it".

India too is concerned about climate change as it affects all of us, so it is putting stress on changing lifestyle, the finance minister added.

Dattopant Thengadi, the late RSS leader and founder of the Bharatiya Mazdoor Sangh (BMS) showed the middle path which means Atmanirbhar (self-reliant) Bharat, Ms Sitharaman said, adding that India is the third country in the world with the highest number of unicorns.

Thengadi set up the BMS at a time when trade unions were synonyms with communism, she said.

The ruling Congress and communists were friends so communist trade unions got the government's support, Ms Sitharaman claimed.

The communists who were influenced by Marxism gave the slogan 'workers of the world unite', while Thengadi asked workers to abandon the path of struggle and work in coordination mode and coined the slogan "workers unite the world," she said.

India's brand image has been enhanced under the Narendra Modi government, she said, citing the celebration of Yoga Day all over the world.

The Union government has been removing restrictions on licenses to promote equality and free competition, she said.

Thengadi was in favour of self-employment rather than salaried employment, Sitharaman recalled.

Entrepreneurship is in the DNA of India, she added.

Under the Congress rule, there was central planning, and a single model was implemented in all states in the name of socialism, the finance minister said.

China is a communist country but it too is building its economy by taking the help of capitalists, she said.

Madhya Pradesh Chief Minister Shivraj Singh Chouhan said during the event that a report presented by a state government's task force has set a target of taking the contribution of the state to the country's economy to USD 550 billion by 2025-26.

As per the recommendations of this GSDP Task Force, economic strategies have been framed for the economic and overall development of the state to achieve the target, he added.