Coronavirus vaccination figures over the last month shows a shocking drop in numbers from four weeks ago.

Over the last weeks, several states, including Delhi, have flagged vaccine shortage. (File)

The drop in the number of fresh Covid infections in the country is being twinned by a drop in the number of vaccinations -- increasing concern about a possible third wave which experts say will affect children. Official data shows the number of tests has also plateaued. Instead of stepping up tests during a spike -- as global experts advise to stay ahead of the curve -- the current figures are way below the country's capacity and way below a comparative percentage.

Vaccination figures over the last month shows a shocking drop in numbers from four weeks ago. From 32.7 lakh, the number has slid to 6.9 lakh. 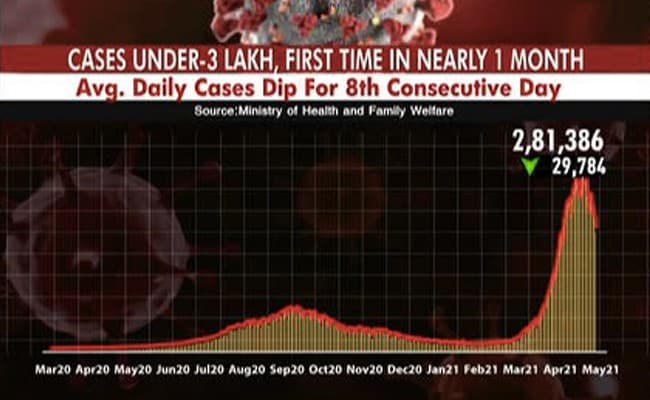 At the current rate of 1.8 million vaccination per day, it would take more than 3 years to vaccinate 80 per cent of the country's population -- the magic figure needed for herd immunity. To reach the target of vaccinating 1.112 billion people by December 31, which is what the government is hoping to achieve, 8.95 million people needs to be vaccinated every day. Over the last weeks, several states, including Delhi, have flagged vaccine shortage. A number of vaccination centres have been shut in Maharashtra. Delhi will have to do the same, at least where 18-44-year-olds are concerned.

Deputy Chief Minister Manish Sisodia on Monday said there are vaccine stocks only for the next three days. The Centre, he said, has written informing Delhi that it can send no more vaccine for this age group this month.

While the two vaccine producers supplying the country -- Serum Institute and Bharat Biotech -- are ramping up capacity, the Centre has indicated that supplies can get a boost only in July or August.

Union Agriculture Minister Narendra Tomar has assured that enough vaccine doses will be available from July-August. Over the weekend, his cabinet colleague and Union Health Minister Dr Harsh Vardhan said the number of vaccine doses administered will reach 51.6 crore by the end of July.

The government has been trying to expand the vaccine palette, but so far only Russian vaccine Sputnik V has made an appearance. US vaccine makers Pfizer and Johnson &Johnson have turned down the government's offer, sources have said.

Last week, the Centre announced a bigger gap between the two doses of Covishield - from 6-8 weeks to 12-16 weeks -- drawing Congress mockery. The Centre's measure was just expediency in face of the vaccine shortage, several leaders have said.

The number of tests, meanwhile, indicates that the average daily figure is up by only 75 per cent from April 1 -- a minuscule figure when the rate infection is taken into consideration. From April 1 to the peak last week, the number of people infected has undergone a whopping 531 per cent hike. 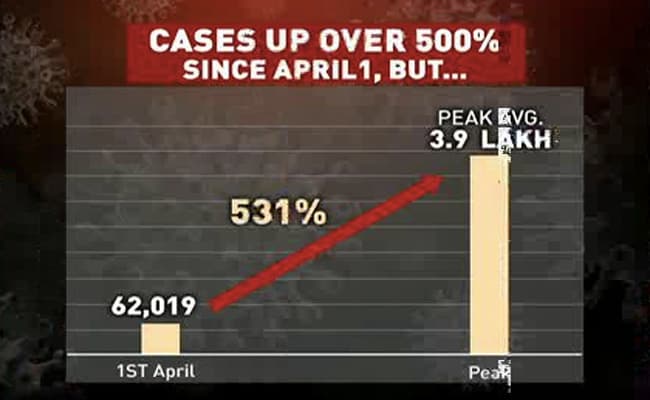 The testing capacity, though, is far from being pushed to the limit. India has a capacity of conducting 33 lakh tests, but the daily average is 18 lakh -- up from 10 lakh on April 1. This means 45 per cent of the country's testing capacity is lying unused.

Earlier this month, the government said patients will not need a second test and will be considered Covid-free after 15 days. This, the government had said, was to keep the pressure of the country's labs, which were being hugely stretched in view of the second wave.

"At present, the laboratories are facing challenges to meet the expected testing target due to extraordinary case load and staff getting infected with COVID-19," said then Indian Council of Medical Research, the nodal body in the fight against Covid.

The low test figure has raised questions about under-reporting of cases -- an allegation doing the rounds since foreign media first highlighted the endless funeral pyres at crematoriums across the country.

On Monday, for the second time in three days, the fatality figures crossed 4000 -- 4,106 Covid patients have died since yesterday. The daily surge dropped below the 3 lakh-mark for the first time since April 21 -- with 2.81 lakh fresh infections reported in the last 24 hours. 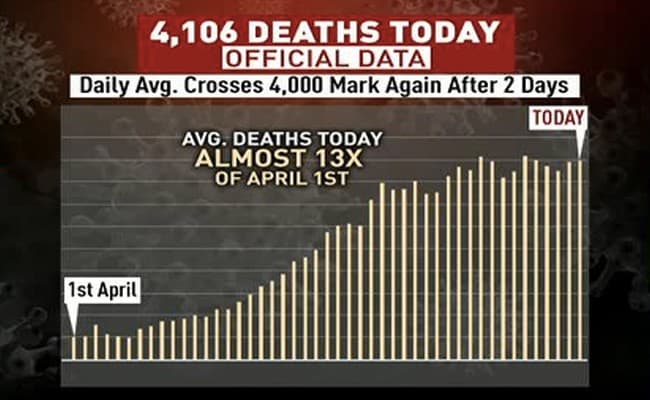 On Sunday, Prime Minister Narendra Modi had dialled the Chief Ministers of Uttar Pradesh, Chhattisgarh, Rajasthan and Puducherry to discuss the Covid situation with them.