While Nusrat Jahan and Mimi Chakraborty initially posed for the pictures, the two got uncomfortable and restless when they were unable to move past the media personnel. 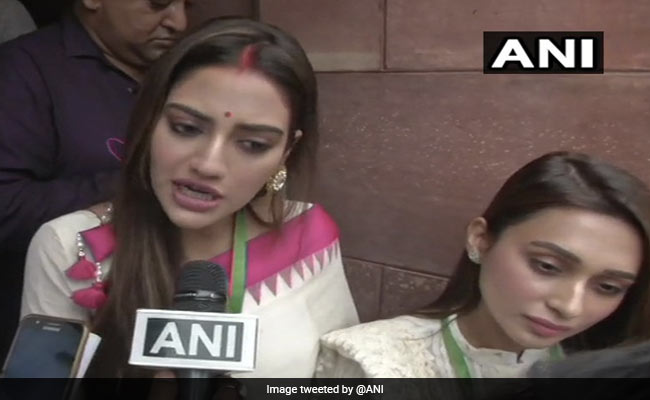 Unable to move past the media personnel, Nusrat Jahan asked them to back off.

Newly-elected Trinamool Congress parliamentarians Nusrat Jahan and Mimi Chakraborty lost their patience outside the parliament on Tuesday after media persons mobbed them asking for quotes and pictures.

While the actors-turned-politicians initially posed for the pictures, the two got uncomfortable and restless when they were unable to move past the media personnel, reported news agency ANI.

At one point, Nusrat Jahan protectively put her arm around her friend Mimi Chakraborty and asked the media persons to back off. "Aap dhakka nahin maar sakte sir, samajhiye baat ko (You cannot push us sir, please try to understand)," Ms Jahan said.

The security persons had to intervene to help them move towards their vehicles. They later asked the media persons to stand in a line at a reasonable distance and click the pictures.

The two actors-turned-politicians took oath in the Lok Sabha today. They had skipped the earlier official ceremony as the they were away for Ms Jahan's wedding ceremony in Turkey.