Taranjit Singh Sandhu was the Deputy Chief of Mission at Embassy of India in Washington from July 2013-January 2017. 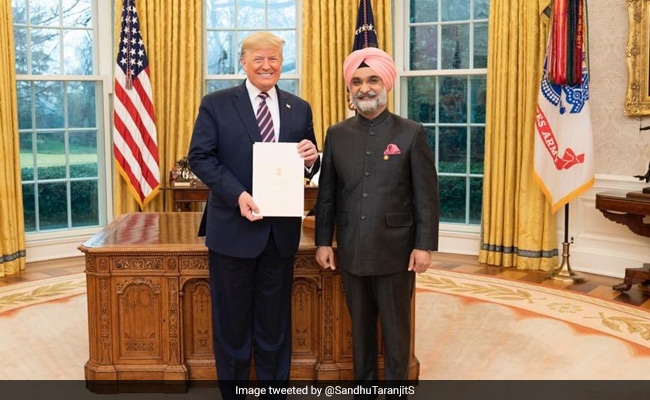 Taranjit Singh Sandhu with US President Donald Trump at the Oval Office.

US President Donald Trump welcomed India's Ambassador-Designate to the United States Taranjit Singh Sandhu with a ceremony at the White House on Thursday.

Donald Trump warmly welcomed Mr Sandhu, a career foreign service official, back to Washington DC and wished him success in his responsibilities as India's ambassador to the US.

"The President fondly recalled his friendship with Prime Minister Narendra Modi and their several interactions," the Indian Embassy said in a statement.

Mr Sandhu conveyed to Donald Trump greetings from President Ram Nath Kovind and PM Modi. He said that the vision and guidance provided by PM Modi and President Trump in the last three years has moved India and the United States towards greater strategic convergence.

The Indian Ambassador-designate affirmed his commitment to work towards strengthening strategic partnership between India and the US, which is anchored in mutual trust and friendship, democratic values and people-to-people ties, the statement said.

Mr Sandhu started his diplomatic career from former Soviet Union (Russia) where he worked as Third Secretary (Political) / Second Secretary (Commercial) in the Indian Mission from 1990 to 1992.

Following the breakup of Soviet Union, he was sent to open a new Embassy in Ukraine. He served as Head of Political and Administration Wings in Indian Embassy in Kiev from 1992 to 1994.

Mr Sandhu was Consul General of India in Frankfurt from September 2011 to July 2013. He has worked in the Ministry of External Affairs as Joint Secretary (United Nations) from March 2009 to August 2011; and later as Joint Secretary (Administration) heading the Human Resource Division.

He was Officer on Special Duty (Press Relations), Ministry of External Affairs from December 1995 to March 1997, and was responsible for liaison with foreign media in India.

Comments
India's envoy to USIndian embassy in US