US President Donald Trump arrived in India on Monday for a lightning visit featuring a huge rally and a visit to the Taj Mahal.

US President Donald Trump and First Lady Melania Trump tried their hand at spinning the charkha at Mahatma Gandhi's Sabarmati Ashram in Ahmedabad on Monday, shortly after arriving for their first official visit to India. The spinning wheel, associated with Mahatma Gandhi's freedom movement and campaign for self-reliance, is one of India's most recognisable symbols.

Prime Minister Narendra Modi was seen showing around the Trumps at the Sabarmati Ashram and telling them about the charkha. PM Modi also presented a memento of Mahatma Gandhi's "Three Wise Monkeys" to the US president.

Donald Trump and Melania Trump together garlanded an image of Mahatma Gandhi at the Ashram.

Donald Trump signed the visitor's book at the Ashram with a message to "my great friend Prime Minister Modi" but did not mention Mahatma Gandhi. 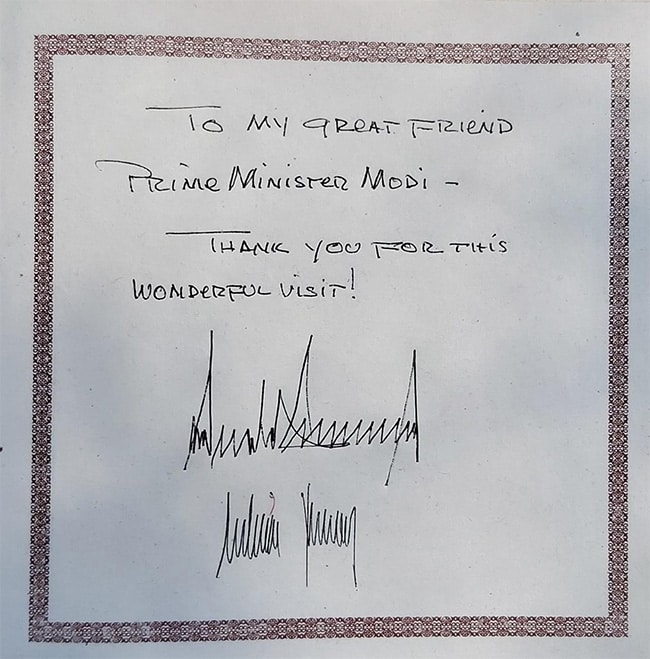 At the Sabarmati Ashram, Mr Trump, First Lady Melania and his daughter Ivanka Trump and son-in- law Jared Kushner along with a US delegation were served high tea featuring Gujarati delicacy Khaman, broccoli and corn samosa, apple pie and Kaju Katli during their 15-minute stay at the 'Hriday Kunj', where Mahatma Gandhi stayed for 13 years and also took the famous pledge at the beginning of the Dandi March.

"The US President was happy to visit the ashram. While leaving he said that it was a very peaceful experience and appreciated the simple living style of Gandhi ji," Sabarmati Ashram Trustee Kartikeya Sarabhai  was quoted as saying by news agency ANI.

The US President arrived in India on Monday for a lightning visit featuring a huge rally at the world's biggest cricket stadium and other high-profile photo opportunities, but likely short on concrete achievements.

While sharing concerns about China and deepening defence ties, India has bristled at Mr Trump's offer to mediate over the Kashmir dispute with Pakistan, and at unease in Washington over the controversial Citizenship Amendment Act criticised as anti-Muslim.

Will Continue To Work As Chief Minister For Next 2 Years: BS Yediyurappa