Do Not Speak Out of Turn, PM Narendra Modi Sternly Warns BJP Leaders 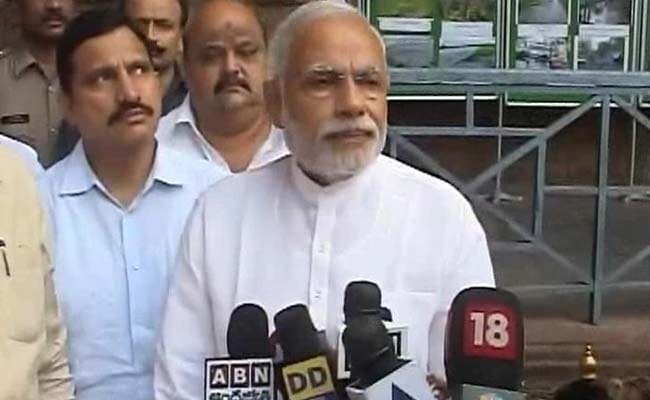 New Delhi: At a meeting of all BJP law-makers in Parliament today, Prime Minister Narendra Modi urged them "not to address the nation" out of turn. "I will not compromise on this," he warned.

His statement came hours after union minister Sadhvi Niranjan Jyoti used an expletive at a campaign rally in Delhi, making the BJP vulnerable to a massive attack by the opposition. In Parliament today, opposition leaders like Mayawati demanded the resignation of the minister, who then apologised for the offensive remark.

Tightly-controlled communication has been a characteristic of the new government. Mr Modi has never given a press conference since his landslide victory in May; in October, he met 200 reporters for tea and addressed them, but took no questions, at his first staged meeting with the press since he was elected.

The PM prefers using state media as well as his huge Facebook and Twitter following to communicate his views and make announcements. Though Mr Modi has not given an interview to the Indian media, he has spoken with foreign news outlets ahead of trips abroad.

Critics say that by choosing state-backed broadcasters Doordarshan News and All India Radio (AIR) as his platforms of choice, the PM is shielding his government from tough questions. They also claim that the PM's leadership style is dictatorial, allowing senior ministers and bureaucrats little room to talk to the press or share their views.

That charge has been emphatically denied by members of the government like Prakash Javadekar, who was, till recently, the Information and Broadcasting Minister. "There is complete freedom in our regime," he told reporters in October.

Promoted
Listen to the latest songs, only on JioSaavn.com
In September, the Editors Guild of India issued a statement calling on the government to interact more with journalists. The statement noted "a certain deficit of transparency in the functioning of the government," citing the delay in setting up a media liaison in the Prime Minister's Office and restricting access to ministers and bureaucrats.

"We Don't See Priyanka, Salamat As Hindu-Muslim": Big Court Verdict In UP