Lok Sabha elections 2019: There were reports that Congress's Digvijaya Singh had camped out in Bhopal as he was nervous of the outcome of the contest. 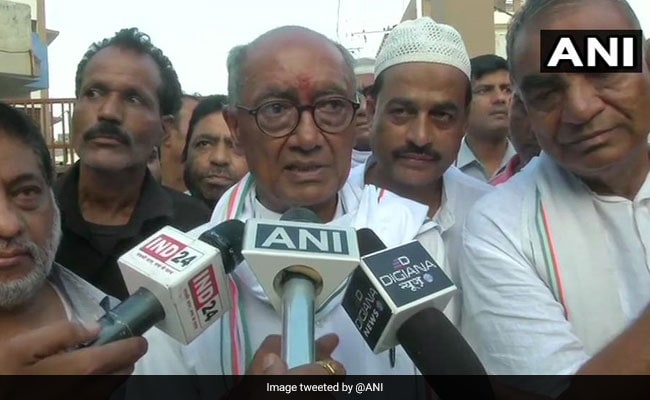 Bhopal elections: "I couldn't go to vote to Rajgarh and I regret it": Congress' Digvijay Singh

At the end of a polarised campaign in Bhopal, Congress's Digvijaya Singh -- up against the BJP's Pragya Thakur -- spent the day in the city, as voting was held on the prestigious seat. In the process, he missed voting himself. His vote is at Rajgarh, a seat 140 km from the Madhya Pradesh capital, which he has won twice.

The BJP claimed Mr Singh had camped out in Bhopal as he was "nervous" about the outcome of the contest -- one that he entered on a dare from Chief Minister Kamal Nath. The BJP's Amit Malviya tweeted: "Buzz from Bhopal: a nervous Digvijaya Singh is camping in Bhopal and has so far not left for Raghopur, place where he was supposed to cast his vote from. So the two time CM is struggling against the Sadhvi."

"I was busy overseeing the voting in Bhopal," Mr Singh said. Asked if he was "nervous", Mr Singh told NDTV, "No, no, not at all". The voters' response, he said, was "very good".

"Voting will pick like assembly (elections)" and he was "100 per cent confident", he told NDTV.

Bhopal has been voting for the BJP for nearly three decades and is seen as one of the toughest constituencies for the Congress to win.

But with the party -- which wrested the state from the BJP after three consecutive terms in power -- out to replicate the result across its 29 Lok Sabha seats, Mr Singh was challenged by Chief Minister Kamal Nath to pick the "toughest seat".

The 72-year-old made it clear that Rajgarh and not Bhopal, was his choice. But Kamal Nath vetoed it as a soft option.

A highly polarised campaign followed, marked by the BJP candidate's controversial remarks about Hemant Karkare, the police officer who died during the Mumbai terror attack, and her pride over participation in the demolition of the Babari mosque in Ayodhya.

For the latter remark, Pragya Singh was even barred from campaigning by the Election Commission.

Voting was held on eight seats of Madhya Pradesh today. The counting of votes will take place on May 23.