The BJP, however, hit back at Digvijaya Singh saying that he was lying, and maintained that the party had nothing to do with the developments. 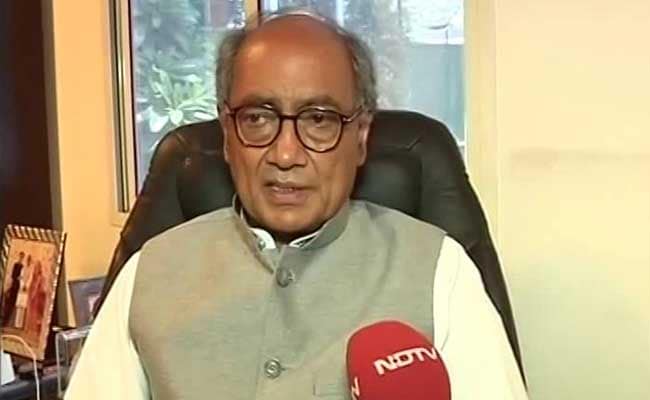 Digvijaya Singh had alleged his party MLAs were being offered a "huge amount of money" by BJP leaders.

Congress veteran Digvijaya Singh on Thursday accused five BJP leaders, including former Madhya Pradesh chief minister Shivraj Singh Chouhan, of being involved in the alleged attempt to poach MLAs to pull down the Kamal Nath-led government in the state.

The BJP, however, hit back at Digvijaya Singh saying that he was lying, and maintained that the party had nothing to do with the developments.

In a late-night political drama in Madhya Pradesh on Tuesday, the Congress claimed that the opposition BJP took eight MLAs to a hotel in Haryana as part of a conspiracy to topple the Congress government.

On Thursday morning, the Congress held a press conference in New Delhi, in which it claimed that the BJP "abducted 14 MLAs" to bring down its government in Madhya Pradesh.

Taking it to Twitter on Thursday, Digvijaya Singh held five BJP leaders including Chouhan, responsible for the recent "horse-trading" attempt.

"Horse-trading by the BJP in Madhya Pradesh has come to light. But their plans were not fulfilled. Thanks to all the MLAs," Digvijaya Singh said in a tweet.

"Modi-Shah ji, why are you looking for (black) money in other countries, it''s in your party!" he added on the micro-blogging site.

On Monday, Digvijaya Singh had alleged his party MLAs were being offered a "huge amount of money" by BJP leaders as part of their attempt to destabilise the Kamal Nath government.

The state BJP, however, termed this entire episode as the internal tussle of the ruling Congress.

Talking to PTI, BJP spokesman Rajnish Agrawal alleged, "Digvijaya Singh is speaking lies. The entire episode has exposed the internal tussle of Congress. None of the MLAs, allegedly involved in entire episode, have made allegations against the BJP."

"The BSP and SP MLAs as well as those belonging to the Congress, who returned from Delhi, have denied the charges of horse-trading," he added.

"This is a conspiracy hatched by the Congress, which stand exposed now. BJP has nothing to do as proved by the statements of the MLAs," Agrawal said.

The Congress-led state government has the support of four Independent MLAs, two Bahujan Samaj Party (BSP) legislators and one of the Samajwadi Party (SP). Two seats are currently vacant following the demise of a Congress and a BJP legislator.