Adhir Ranjan Chowdhury had accused Amit Shah of sitting on Tagore's seat and disrespecting the icon when he was at the Visva Bharti University on January 20. 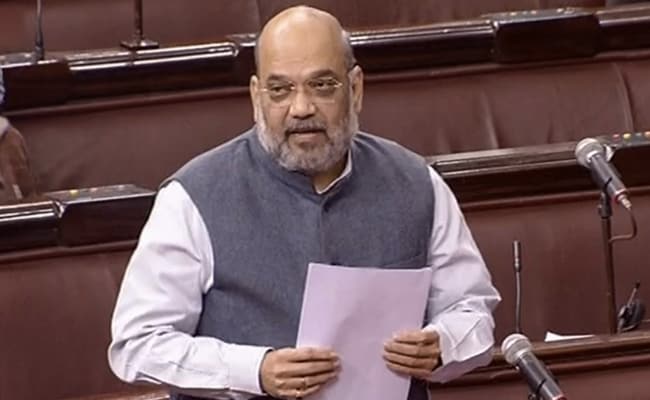 Amit Shah said in fact, Congress leaders had done what he was being accused of.

Home Minister Amit Shah on Tuesday denied a Congress leader's charge that he sat on Rabindranath Tagore's seat during a visit last month to Santiniketan in West Bengal.

Adhir Ranjan Chowdhury, the leader of the Congress in the Lok Sabha, had, while speaking in the house, accused Mr Shah of sitting on Tagore's seat and disrespecting the icon when he was at the Visva Bharti University on January 20. Not correct, the Home Minister retorted, saying he had confirmed it with the Vice Chancellor of the university set up by Tagore.

"Adhir Ranjan Chowdhury said during his speech yesterday that I sat on Rabindranath Tagore's seat during my visit to Santiniketan. I have a letter from the Vice Chancellor of Visva Bharti where he clarified that no such incident happened, I sat near a window where anyone can sit," the Home Minister said.

Mr Shah said in fact, Congress leaders had done what he was being accused of.

Rajiv Gandhi had tea on his sofa, he added, producing the photos in the house.

The Vice Chancellor of Visva Bharti, Bidyut Chakraborty, also wrote to Mr Chowdhury on his allegation against Mr Shah saying he had been "misinformed as this is patently untrue"

Mr Shah sat on a makeshift seat, which was "the edge of a window on which cushions are placed", he wrote. So it was not a chair and had never been Tagore's seat at all, said the Vice Chancellor, inviting the Congress MP to verify the fact for himself.

This is the latest in the bitter fight for Bengal's icons and legacies in the lead-up to assembly elections due by May. Chief Minister Mamata Banerjee's Trinamool Congress has accused challenger BJP of trying to appropriate legends like Netaji Subhash Chandra Bose and Tagore for votes in its aggressive campaign for Bengal.

In Parliament, Mr Chowdhury and Trinamool Congress leader Saugata Roy even commented on Prime Minister Narendra Modi's beard and accused him of trying to look like Tagore "without understanding Bengal".