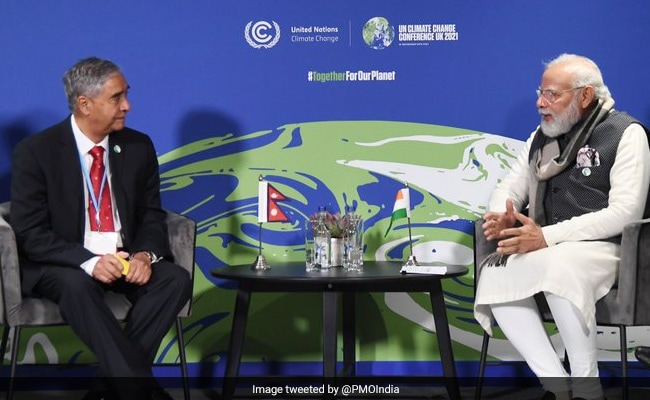 Nepal Prime Minister Sher Bahadur Deuba has thanked his Indian counterpart Narendra Modi for providing support to Nepal in essential medical supplies and vaccines in its fight against Covid-19 pandemic during their first meeting on the sidelines of the climate summit in Glasgow, according to the Foreign Ministry in Kathmandu.

Prime Minister Deuba met with PM Modi on Tuesday for the first time after he became the premier of the Himalayan nation in July and had a " fruitful talks" on many aspects of India-Nepal friendship.

"I had fruitful talks with Prime Minister Sher Bahadur Deuba on many aspects of India-Nepal friendship. Fighting the global pandemic and issues related to promoting sustainable development are important dimensions of our friendship," PM Modi tweeted in Nepali after the meeting in Glasgow.

During the meeting, overall matters of the bilateral relations were discussed, according to a press release issued by Nepal's Ministry of Foreign Affairs.

"Prime Minister Deuba thanked the Prime Minister of India for its valuable assistance in socio-economic development of Nepal including infrastructures, railway links, petroleum pipeline, reconstruction projects among others," it said.

PM Deuba also thanked India for providing support to Nepal in essential medical supplies and vaccines in its fight against Covid-19 pandemic, the statement said.

India has previously gifted one million doses of 'Made in India' COVID-19 vaccines to Nepal for the immediate requirement of Nepal's healthcare and front-line workers. India also provided essential medical supplies to Nepal during the pandemic.

PM Deuba expressed hope that India's support would continue in supply of chemical fertiliser as in the past.

In June, Nepali and Indian officials had discussed signing a five-year deal to supply chemical fertilisers to Nepal.

"The Indian Prime Minister stated that he would work for further strengthening Nepal-India ties and assured of his full support to Nepal as required," the statement read.