In an emotional speech in Vidhana Soudha, BS Yeddyurappa said it was his dream to be Chief Minister and work with PM Narendra Modi for the people of the country 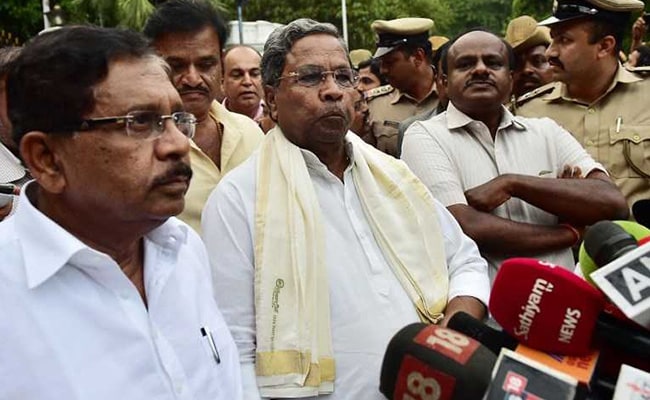 New Delhi: Two days after he took oath as Karnataka's chief minister with a promise to form a BJP government in the state, BS Yeddyurappa resigned from the post, moments before the much-awaited trust vote today as directed by the Supreme Court on Friday. In an emotional speech in Vidhana Soudha in Bengaluru, Mr Yeddyurappa said it was his dream to be Chief Minister and work with PM Narendra Modi for the people of the country. "I will lose nothing if I lose power, my life is for the people," he said.

Right after his address, touted to be 13-page-long, he headed for Raj Bhavan to submit his resignation. Sources told NDTV that the decision was taken by the BJP leadership that didn't want to be disgraced over horse-trading charges, especially when the national election is just months away.

Mr Yeddyurappa signed off with a promise to "get 28 out of 28 seats in Lok Sabha".

Here is who said what after the big development:

Soon after Mr Yedyurappa quit, former Karnataka Chief Minister Siddaramaiah said that the BJP's "Operation Lotus" to poach legislators from other parties has failed and democracy has won in Karnataka. He tweeted, "Conspiracy by BJP fails. Their attempts to indulge in anti-constitutional activities have failed."

"With the proceedings live and every citizen becoming a pro tem Speaker, democracy in Karnataka was saved -- for the time bring (sic)," tweeted Former union minister P Chidambaram. "Poor Mr Yeddyurappa. When the puppeteers fail, the puppet falls and breaks," he further said.

All those who believe in democracy are happy, said Andhra Pradesh Chief Minister Chandrababu Naidu, whose Telugu Desam Party exited the NDA in March.

Delhi Chief Minister Arvind Kejriwal was also among the first ones to hail the triumph for democracy. "BJP's attempts to subvert democracy have miserably failed in Karnataka. BJP's lust for power through foul means stands completely exposed. Will BJP learn any lesson now?" he said in a tweet.

Mr Kejriwal also appreciated the role played by the Supreme Court and said, "India's judiciary has risen to the occasion and has safeguarded our democracy."

"This is a big blow for the BJP and I think what they had been planning all along for 2019 has failed. They will now have to rethink and change their strategies," Dalit leader and Bahujan Samaj Party (BSP) chief Mayawati said.

Senior Congress leader Shashi Tharoor, too, reacted in his signature style. "As I take off from Auckland, news comes in of BSY's resignation. That so many MLAs proved impervious to the BJP's blandishments is an encouraging sign for Indian democracy. And that the party with the highest percentage of votes will now form the government w/an ally is gr8 news!"

Congress's Karnataka unit, too, called it a win not for any particular party, but for the state. "BJP's unconstitutional efforts to rule have failed. Their illegal means of manufacturing a majority stands exposed. Congress & JD(S) have fought & upheld democracy. Karnataka will now get a stable Govt that will focus on Development."

Another Congress leader Ashok Gehlot termed it a win for truth. "This is a historic day in our democracy. It is a victory of democratic ideals n values."

Promoted
Listen to the latest songs, only on JioSaavn.com
"Truth can never be defeated! Truth will always defeat a lie or liar!" said Rashtriya Janata Dal's Tejashwi Yadav.

However, BJP's Giriraj Singh said, "I believe that unarmed truth and unconditional love will have the final word in reality. This is why right, temporarily defeated, will come back stronger. Thank you Karnataka."