The driver of the car has been identified as Shah Ved Sheikh, (27), a car dealer and a resident of old Delhi's Turkman Gate, police said. 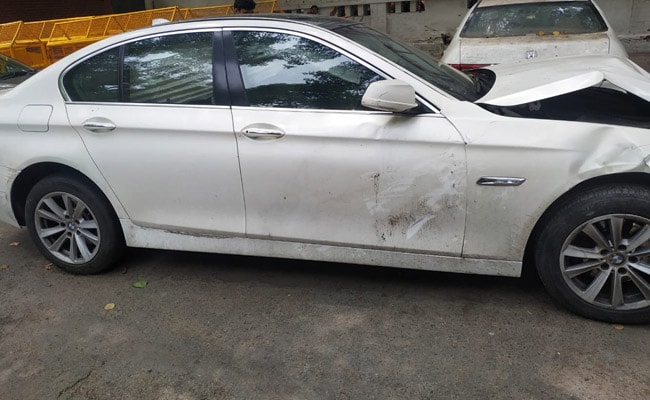 The accident took place on the intervening night of Friday and Saturday.

Three members of a family including two women were severely injured after their vehicle was allegedly hit by a speeding BMW car on Bhagwan Das Road in Delhi's Tilak Marg area, police said on Monday.

The driver of the car has been identified as Shah Ved Sheikh, (27), a car dealer and a resident of old Delhi's Turkman Gate, police said.

Soon after the accident, he fled from the spot, leaving his vehicle behind, they said.

The accident took place on the intervening night of Friday and Saturday.

Sheikh was later arrested, he added

Shakti Singh (36), his wife Pushpa Rani (31) and his sister (26), who were travelling in their Wagon R car, were severely injured and were rushed to the Ram Manohar Lohia Hospital.

All the three are stated to be out of danger, police said.

According to the police, the accident took place when the family was returning to Lal Bahadur Shastri Hospital after collecting blood plasma from the Indian Red Cross Society.

The blood plasma was meant for his brother's new born baby girl, who had developed some complications during birth and was undergoing treatment at the hospital.

The speeding BMW, which was coming from the Mandi House side rammed into the Wagon R from one of the sides, leaving all the three family members injured.

The impact of the accident was such that the victim's vehicle toppled and was completely damaged. During the accident, the blood plasma that they were carrying too was destroyed, a senior police officer said.

Meanwhile, the baby girl who was born on July 4, died on the same day during the course of treatment at Lal Bahadur Shahtri Hospital where she was admitted since birth, he said.

Deputy Commissioner of Police (New Delhi) Eish Singhal said a case has been registered against the driver under section 279 (rash driving) and 338 (causing grievous hurt by act endangering life or personal safety of others) of the Indian Penal Code at Tilak Marg police station and the accused has been arrested.

The police said the driver was not under the influence of alcohol but was driving rashly.

Vishal Singh, whose child was born on July 4 at Lal Bahadur Shastri, said since his daughter had developed some complications during birth, the doctor had asked them to arrange blood plasma as it was not available at their hospital.

"It was late on Friday night when the concerned doctor asked us to arrange blood plasma for my daughter's treatment. They said it was urgent and since it was raining, my family members advised me against going on a bike to a blood bank.

"So while I stayed back in the hospital, my elder brother along with his wife and our sister rushed to the Indian Red Cross Society in their Wagon R to collect the plasma. But unfortunately, on their way back, they met with an accident and were left severely injured," Mr Singh said.

Mr Singh said his younger sister, who was severely injured only remembers sitting on the back seat of her car when suddenly another speeding car hit their vehicle and she fell unconscious.

"I only happened to see my daughter, the day she was born. She had developed issues related to breathing and other complications. But unfortunately, she passed away around 5 am on Saturday," Mr Singh said.

Mr Singh's elder brother Shakti, who was driving the vehicle, sustained at least nine stitches and has been discharged while his wife, who sustained grievous injuries, is still undergoing treatment. Their sister received at least five-six stitches on her head and other injuries on her shoulder and is yet to be discharged.