Braving freezing cold, agitated students, some of them shirtless, protested outside the gates of Jamia university. Slogans of "Inquilab Zindabad" rent the air as the students took out a march, demanding a CBI inquiry into the alleged "police brutality". 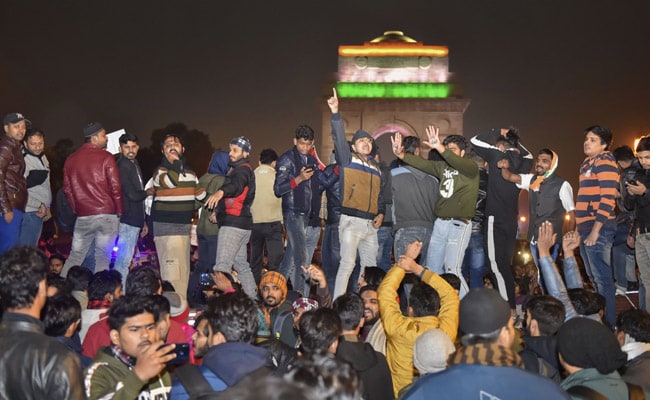 Thousands of students took to the streets in Delhi on Monday against the police crackdown in Jamia Millia Islamia with demonstrations there and Delhi University campuses as well as the India Gate amid heavy police presence. In the light of cellphones, demonstrators were seen reading out the preamble of the Indian constitution at India Gate.

Fifty detained students of Jamia Millia Islamia were released even as the situation in the campus remained tense with scores of hostel students leaving for home. University Vice-Chancellor Najma Akhtar demanded a high-level inquiry into the police action on Sunday after a protest near the campus against the amended Citizenship Act turned violent.

Delhi Police said that the crime branch will investigate the violence in which four DTC buses, 100 private vehicles and 10 police bikes were damaged and asserted that it used "maximum restraint, minimum force" despite being "provoked" by protesters.

Two men, who were apparently part of demonstration near Jamia on Sunday, have been admitted to the Safdarjung Hospital with "gunshot injury", sources said.

However, the police continued to deny that there was any firing during the Sunday incident."The nature of injuries being reported could be due to the sharp end of tear gas shells and we are probing the allegations," a senior police officer said.

Several students of Delhi University boycotted exams and held protest outside the Arts Faculty in North Campus even as a large number of police personnel were deployed by authorities to prevent any flare up.

Braving freezing cold, agitated students, some of them shirtless, protested outside the gates of JMI university. Slogans of "Inquilab Zindabad" rent the air as the students took out a march, demanding a CBI inquiry into the alleged "police brutality".

Anas Siddiqui, a student, said that the police called them "terrorists" and dared them to come out of the campus and face them.

Later in the evening, scores of students from different universities across Delhi gathered at the India Gate against police crackdown on students in Jamia Millia Islamia and Aligarh Muslim University.

Slogans of "Delhi Police down down" and "Tanashahi nahi chalegi" were being raised. Police had put up barricades to prevent students from reaching the Amar Jawan Jyoti where a Preamble reading event was scheduled.

The Jamia Millia Islamia had turned into a battlefield on Sunday as police entered the campus and used force, following violent protest against the Citizenship Act.