Published by Springer, "The WTO and Food Security" deals with public stockholding policies of selected developing countries from the perspective of WTO rules. 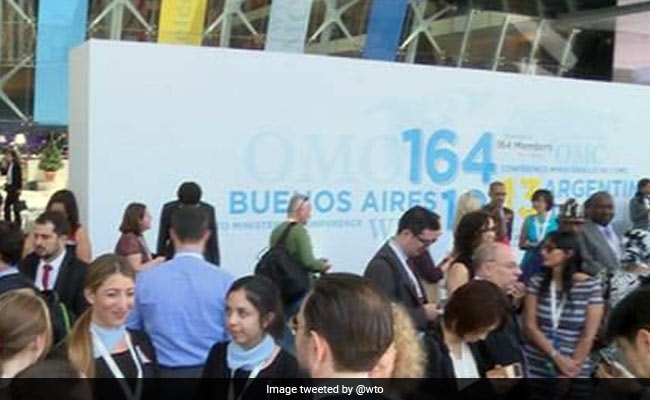 The 11th ministerial conference of WTO was held in Buenos Aires

Buenos Aires: A book on food security written by Sachin Kumar Sharma, associate professor of the Delhi-based Centre for WTO Studies has become a best seller at the 11th ministerial conference in Buenos Aires.

Published by Springer, "The WTO and Food Security" deals with public stockholding policies of selected developing countries from the perspective of WTO rules.

The book also makes an assessment of the provisions of the Agreement on Agriculture (AoA) and how they could hamper the efforts of countries to address the challenges of food security.

According to Mr Sharma, who felicitated for the success of his book at a session in Buenos Aires, the book highlights the issue of public stockholding in India and elsewhere and also the policy constraints being faced by developing nations on account of the WTO rules.

The public food stockholding is a hot topic in Buenos Aires as the 11th ministerial is mandated to come out with a permanent solution to deal with the food security issue.

Promoted
Listen to the latest songs, only on JioSaavn.com
The book, according to the author, also made a case for amending the provisions of the AoA to make WTO rules just and fair for the millions of people suffering from hunger and malnutrition in developing countries.

It deals with food security problems in 12 countries, including China, Egypt, India, Indonesia, Pakistan, Turkey and Zimbabwe and steps needed to mitigate the problem of hunger and undernourishment.