According to the Delhi Police, security has been tightened at the protest sites to keep a watch on the movement of farmers. 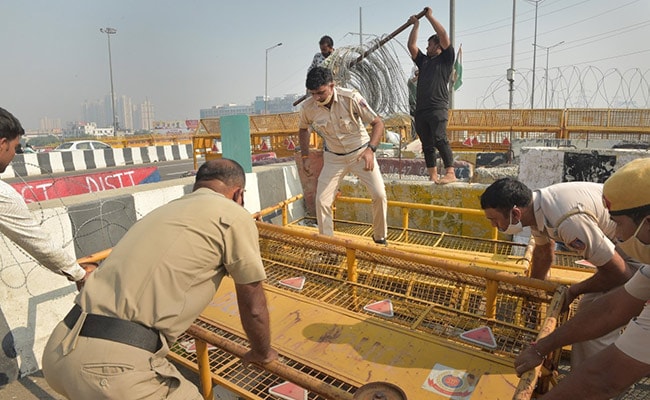 The barricades will be removed based on the movement of farmers, the police said (File)

The Delhi Police will remove the multiple layers of barricades at the three farmers' protest sites in a phased manner depending on the movement of protesters who will start returning home from tomorrow, officials said on Friday.

The Samyukt Kisan Morcha (SKM), an umbrella body of 40 farm unions, had on Thursday decided to suspend the movement against the farm laws and announced that farmers camping at three border points of Delhi - Singhu, Tikri, and Ghazipur - will go back home.

The announcement came after the SKM, which is spearheading the movement, received a central government signed letter wherein it agreed to consider the farmers' pending demands, including the withdrawal of cases against farmers, and the formation of a committee on minimum support price (MSP) for their crops.

According to the Delhi Police, security has been tightened at the protest sites to keep a watch on the movement of farmers.

Deputy Commissioner of Police (Outer North) Bijendra Kumar Yadav said farmers have formally declared that they will start returning home from Saturday, but it is not a time-bound exercise as their movement will keep progressing through the day.

"Based on the movement of a sizeable number of farmers, multiple types of barricades, including cemented jerseys, will be simultaneously removed. The police will also start de-barricading in a processed manner," he said.

The temporary structures made to house police personnel will also be removed eventually, officials said.

At the Tikri border in outer Delhi, barricades put up at one side of the carriageway on Rohtak Road were removed in October to allow the movement of traffic, a senior officer said.

On the other side of the carriageway, where farmers were agitating, the temporary accommodations are being dismantled by the protesters as they prepare to return home, he added.

Deputy Commissioner of Police (Outer) Parvinder Singh said, "We are keenly watching the activities (of farmers) and our forces are alert to ensure no untoward incident takes place."

At the anti-farm laws protest site at Ghazipur on the Delhi-Uttar Pradesh border, the Delhi Police had in October removed the barricades and concertina wires.

Multiple layers of iron and cement barricades and at least five layers of concertina wires were put up last year. The blockade was further strengthened after the January 26 violence in several parts of the national capital during the farmers' tractor rally.

"The process of removing the barricades on NH-9 (Rohtak-Delhi Highway) was done to ease vehicular movement in October this year but we have still put up movable barricades which will be removed ultimately with the farmers' movement towards their destination which will be done in a phased manner," said a senior police officer from east district.