Addressing a press conference, the police had on Friday claimed that 9 students, 7 of whom are from Left-leaning bodies, have been identified as suspects in the case. 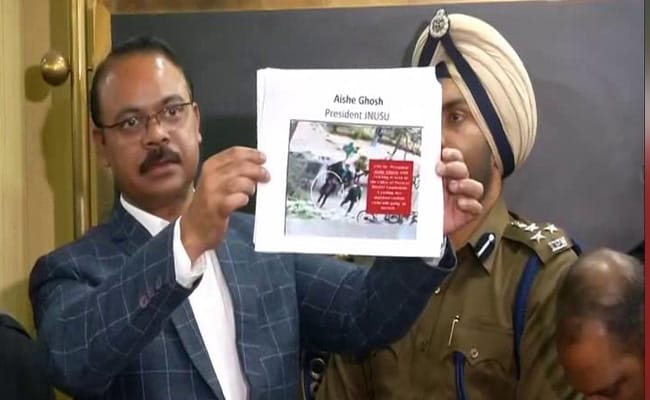 Delhi Police crime branch, probing the JNU violence, said on Sunday that it has sent notices to 49 people, including Akshat Awasthi and Rohit Shah who featured in a sting operation conducted by India Today news channel, to join the investigation.

Akshat Awasthi and Rohit Shah are first year students of Jawaharlal Nehru University. They have been sent notices to join the probe, officials said.

When police contacted Akshat Awasthi and Rohit Shah, they said they will join the probe. Though their phones were later found to be switched off, their locations have been traced and the two will be questioned in connection with their alleged involved in the violence on campus on January 5, the police said.

While Akshat Awasthi belongs to Kanpur, Rohit Shah is a resident of Delhi's Munirka, they added.

Besides them, police have identified Komal Sharma as the masked woman, wearing a checkered shirt, light blue scarf and carrying a stick, who was seen in the purported videos of the violence shared on social media.

Komal Sharma, who is a student of Daulat Ram College, has also been sent a notice to join the probe, the police said, adding her phone was found to be switched off since Saturday night.

According to police, the server room was vandalised on January 4 following which the Forensic Science Laboratory (FSL) team, which visited the campus to collect evidence on Saturday, could not retrieve the data.

The FSL team will visit the campus on Monday again to retrieve data from the server since they are operational now, a senior police official said.

There have been reports that students have received emails from the server room on January 4 and 5, the source of those emails will also be looked into, he said.

Addressing a press conference, the police had on Friday claimed that nine students, seven of whom are from Left leaning bodies including JNUSU president Aishe Ghosh, were identified as suspects in the violence on the varsity campus.

All the nine people have been sent notices to join the probe via email and WhatsApp, police said.

While Panjak Mishra has been asked to join the probe at 11.30 pm tomorrow at the Admin Block, Dolan Samanta and Sucheta Talukdar will be joining the probe on Tuesday, the official said.

Chunchun Kumar has been called to join the probe on January 15, he said.

JNUSU President Aishe Ghosh has also been sent notice to join the probe but police have not received a response from her yet, he added.

60 people were a part of the Whatsapp group "Unity Against Left" that is believed to have been created while the violence escalated on the JNU campus. Among them, addresses of 37 people have been traced and notices have been sent to them to join the probe, police said.