Rakesh Tikait Detained: Rakesh Tikat, the national spokesperson for the Bharatiya Kisan Union (BKU) and a prominent face of the Sanyukt Kisan Morcha (SKM), was stopped at the border around afternoon. 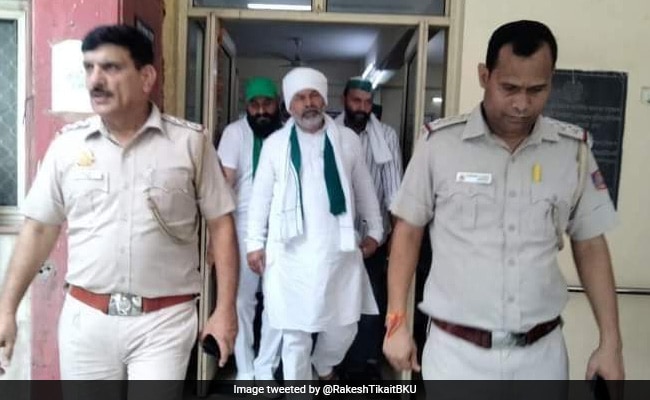 Farmer leader Rakesh Tikait was Sunday detained by the Delhi Police at the Ghazipur border while he was trying to enter the national capital to take part in an unemployment protest rally at Jantar Mantar.

A Delhi Police official said Mr Tikait, the national spokesperson for the Bharatiya Kisan Union (BKU) and a prominent face of the Sanyukt Kisan Morcha (SKM), was stopped at the border around afternoon.

"Thereafter, he was detained and taken to Madhu Vihar police station where police spoke to him and requested him to return," Special Commissioner of Police (Law and Order) Dependra Pathak said.

The DCP said Mr Tikait "agreed" with the police request and "he has been escorted back".

Sources said Mr Tikait was detained as the Delhi police was trying to prevent "undue gathering" in the national capital.

Mr Tikait alleged the Delhi police was working at the behest of the Centre.

"The Delhi Police working at the behest of the government cannot suppress the voice of the farmers. This arrest will bring a new revolution. This struggle will continue till the last breath. Won't stop, won't get tired, won't bow down," Mr Tikait tweeted in Hindi.

"Farmer leader Rakesh Tikait was on his way to the employment movement but was stopped by the police at the border itself. This is very despicable," Mr Rai tweeted in Hindi.

The SKM and other farmers' groups are organising a 'mahapanchayat' at the Jantar Mantar on Monday and they will pass through the jurisdiction of outer district, which includes the Ghazipur border in Ghaziabad.

"In this connection, adequate deployment of local police and outside force will be made in the area of Outer District at Tikri border, major intersections, along the railway tracks and metro station to avoid any untoward incident. Moreover, a full proof law and order arrangement has already been issued in this regard," said Sameer Sharma, Deputy Commissioner of Police (Outer Delhi).