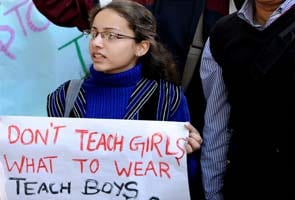 New Delhi: The main suspect in the fatal gang rape of a medical student on a Delhi bus, an attack that triggered angry protests and new laws to punish crimes against women, was discovered hanging in his prison cell by a constable at 5 am, jail officials told NDTV. (Read)

They claimed that three other men, who shared Ram Singh's cell at Tihar Jail, were asleep when he killed himself, using his shirt, and parts of a sleeping mat to suspend himself.

They denied reports that a wooden stool was found in the cell, and said they are not clear on how he managed to attach the rope he created to the grill of a ceiling that was at least eight feet high, or how other prisoners in the tiny cell, 10 feet long and wide, were not wakened.

Ram Singh's family and lawyers have rejected this explanation, and want a CBI inquiry to determine how he died. His lawyer VK Anand said his client's death should be treated as murder.

Ram Singh's parents, who are from Rajasthan, say they met with him recently and he complained that he was being tortured in prison. "He made a mistake -- he admitted that to us -- but even God forgives one mistake," said his mother to news agency AFP. "He was not even given a chance to repent."

He was being tried at a fast-track court for murder and rape along with four other men, including his brother Mukesh. They have pleaded not guilty. The sixth suspect is being tried separately because he is a juvenile.

Promoted
Listen to the latest songs, only on JioSaavn.com
When the men were arrested, their lawyers argued that the trial should be moved away from Delhi because overwhelming public sentiment would deprive their clients of a fair trial. The defence lawyers had also warned that the suspects were vulnerable to attacks from other prisoners in jail.

"I wanted him to be hanged ... publicly. Him dying on his own terms seems unfair," said the brother of the student who died. (Read)