Delhi Election 2020: Several supporters draped themselves in the Indian flag and flashed victory signs as the giant screen showed the party's surge. 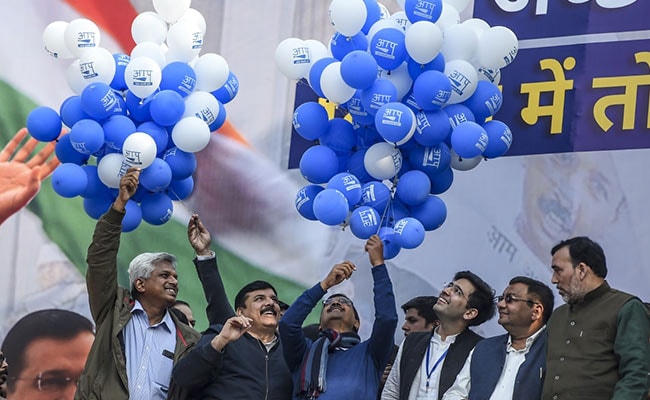 Carrying blue and white balloons, buntings and giant cut-outs of their leader Arvind Kejriwal, Aam Aadmi Party (AAP) workers went into celebratory mode at the party headquarters on Tuesday as trends showed the party was set for a massive victory in the Delhi Assembly polls.

Grooving to the tunes of the party's campaign song - "Lage Raho Kejriwal" - and drumbeats, hundreds of AAP workers celebrated at the party office.

As the party's tally went up, AAP supporters hugged each other and offered "ladoos" amid a surcharged atmosphere. Several supporters draped themselves in the Indian flag and flashed victory signs as the giant screen showed the party's surge. The party workers interpreted the AAP show as the victory of development works.

"Delhi bach gaya," said 21-year-old Ramesh Sharma, an engineer and a volunteer who has been campaigning for the party for the past three months.

"We have barely slept in the last few months. I can't tell you how happy we are. It has sent a very strong message that only development work talks, nothing else," he said.

A stage, decorated with balloons and flowers, was also set up on the roof of the party office, from where Mr Kejriwal addressed party workers.

"We knew it. We have changed the politics of this country. Now it is Delhi, next is India," said Sanjeev Singh, a party volunteer from Hari Nagar.

"We hope we get such a clear majority that a message goes out that doing Hindu-Muslim politics will not work anymore," added another volunteer Fareen Khan. The AAP headquarters were decorated with blue and white balloons and big cut-out of Mr Kejriwal was also put up.

"Hindustan jeeta hai (India has won). I want to thank the two crore people of Delhi for making the son of Delhi victorious," Mr Singh said.

"People of Delhi have showed the way to the country that only development works will take it forward and not Hindu-Muslim politics. All kind of divisive politics has been rejected by the people of Delhi and we will win 70 out of 70 seats," said Sushil Gupta, AAP's Rajya Sabha MP.

Counting centres are spread across 21 locations, spanning 70 constituencies. Polling for the 70-member Delhi Assembly was held on February 8.