The police on Friday served notices to 12 farmer leaders to join the investigation into the violence during the tractor rally on Republic Day. 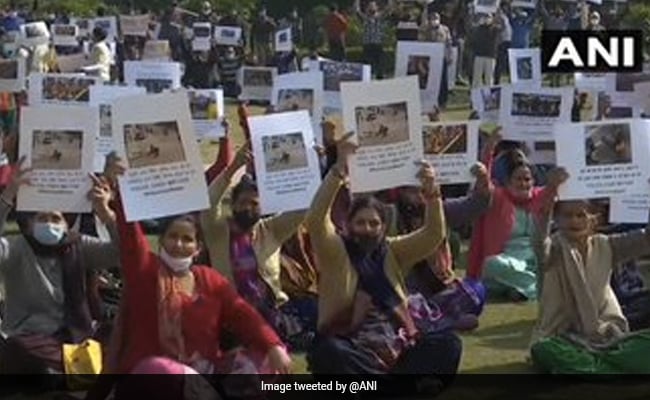 The Delhi Police Mahasangh and family members of the police personnel injured in violence during the farmers' tractor rally on January 26, staged a demonstration at Shaheedi Park in protest against the attack.

They were also accompanied by the retired as well as current Delhi Police officers at the protest.

"I was deployed at the gate of the Red Fort. We were bringing out the crowd that had entered and hoisted the flag, after which we were suddenly attacked. They had sticks and swords with them. I received injuries on my head and legs," said Head Constable Ashok Kumar.

Head Constable Sunita, posted at PS Model Town, was also injured during the attack that took place on Republic Day. "I was deployed at Mukarba Chowk. Deputy Commissioner of Police and Assistant Commissioner of Police were also there. They spoke to protesters asking them to go to approved route. But they turned aggressive, broke barricades, attacked us and vandalised vehicles," she said.

Even though the farmer unions have distanced themselves from the attacks and called it a conspiracy, the Delhi Police held them responsible for it.

The police on Friday served notices to 12 farmer leaders to join the investigation into the violence during the tractor rally on Republic Day. Among those who were served the notices include Buta Singh Burjgill, Darshan Pal Singh, Rakesh Tikait, Shamsher Pandher and Satnam Pannu.

On January 26, during the tractor march by farmers to protest against the three farm laws, entered central Delhi after removing barricades. Several policemen were injured in the violence and vehicles were damaged.