The police said protestors were blocking ambulances and other vehicles. 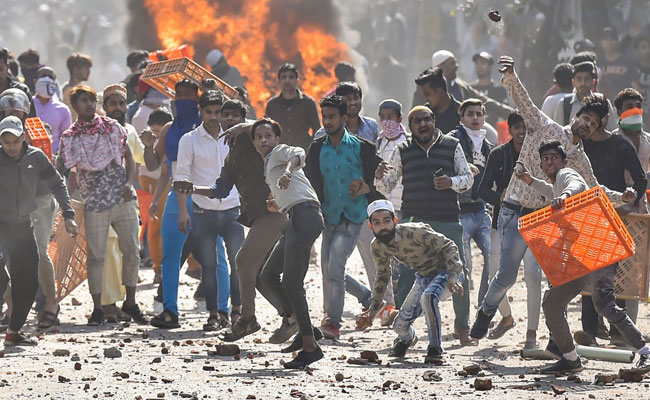 The injured in violent clashes in northeast Delhi are being brought to hospitals on bikes and vans as ambulances fail to make their way to the violence-hit areas, police said on Tuesday.

The police said protestors were blocking ambulances and other vehicles.

Police officer Amit Kumar, who sustained injury on his right hand while he was trying to disperse two groups pelting stones at each other, was brought to the Jag Pravesh Chander Hospital on a bike.

Mr Kumar, posted at Khurjei Khas area, said, "I was trying to disperse two groups who were pelting stones at each other at Khajuri Khas Chowk and suddenly something hit me from behind. I do not know if it was a stone or something else."

Kaif (32), who sustained injuries in clashes at Khureji Khas area, was brought by the police in a van at the hospital.

The autorickshaw driver was parking his vehicle when a mob of 25 to 30 people attacked him with stones. He said his friend rescued him when he was lying on the ground.

Kaif sustained injuries on left side of his face and head.

Another man with suspected gunshot injury was rushed to the Guru Teg Bahadur Hospital on a bike by two men.

One of the men who brought the injured to the hospital said the man sustained injuries in firing at Kabir Nagar side of Maujpur Chowk area.

Clashes broke out between groups supporting and opposing the Citizenship (Amendment) Act (CAA) in northeast Delhi's Jaffrabad and Maujpur on Monday, with protesters torching houses, shops and vehicles, and hurling stones at each other.

Violence has also been reported in Chandbagh and Bhajanpura areas of the city.

The death toll in the clashes has climbed to seven, a senior police official said on Tuesday.

A Delhi Police head constable, Ratan Lal, was among the seven killed, he said.