Vivek Tiwari was allegedly shot dead for not stopping his car at a police checkpoint in Lucknow's Gomtinagar area early on Saturday. 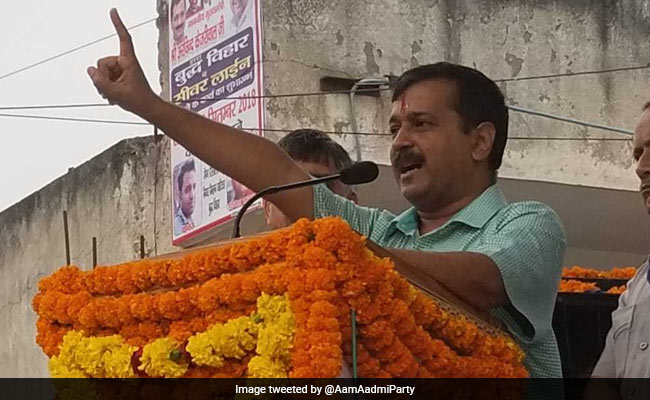 Delhi Chief Minister Arvind Kejriwal tweeted that the BJP does not protect the interests of Hindus.

Delhi Chief Minister Arvind Kejriwal on Sunday tweeted up a controversy by linking the death of a 38-year-old multinational executive, shot dead by an Uttar Pradesh policeman in Lucknow, with his religion in an attack on the ruling BJP.

"Why did they kill Vivek Tiwari, a Hindu? BJP leaders are freely raping women and getting away with it. Open your eyes to the fact that the BJP is not a well-wisher of Hindus. They will not think twice before murdering all Hindus to get to power," he tweeted in Hindi early on Sunday morning.

Three minutes later, he replied in the negative to another user who wanted to know if a proper investigation would be conducted into the incident. "No, even though Vivek Tiwari was a Hindu. BJP does not protect the interest of Hindus."

The Chief Minister's observations were met with criticism by a number of netizens, who counter-accused him of being "silent" on the alleged stabbing of 23-year-old Ankit Saxena by the family of his Muslim girlfriend in west Delhi's Raghubir Nagar earlier this year. Even Mr Tiwari's widow, Kalpana, expressed disapproval over Mr Kejriwal's statement.

"He does not know what I am going through. No politics should be played over my husband's death. Please do not link everything with faith and religion," News18 quoted Ms Kalpana as saying.

On Twitter, BJP supporters shredded Mr Kejriwal's comment using the hashtag #VultureKejriwal, which became one of the top trending topics with nearly 10,000 posts.

Uttar Pradesh Deputy Chief Minister Keshav Maurya, who visited the victim's house on Sunday, also slammed the Aam Aadmi Party leader for "politicising" the incident. "The two policemen who committed this horrendous crime have been sent to prison, and the entire police force cannot be questioned just because of them," he said, adding that incidents like this will not recur in the future.

Mr Tiwari was allegedly shot dead for not stopping his car at a police checkpoint in Lucknow's Gomtinagar area early on Saturday. While the constable alleged that the victim had rammed into a motorcycle and tried to "run over them", a co-passenger in the vehicle said they had not even realised that they were being flagged down.

His body was cremated at Bhaisakund on Sunday in the presence of state minister Brijesh Pathak and local MLA Ashutosh Tondon, among others.

Although both Chief Minister Yogi Adityanath and Uttar Pradesh police chief OP Singh have expressed regret over the incident, the controversy refuses to die down. Former Chief Minister Akhilesh Yadav has questioned the rising number of "encounters" in Uttar Pradesh, and wondered what one could expect from a police force that's been encouraged to turn trigger-happy under the BJP government.

"Uttar Pradesh cannot be saved from fake encounters until an inquiry of such incidents is conducted by a sitting judge," said Mr Yadav.

The two policemen involved in the incident have been dismissed from service and arrested.