The farmers believe that the new laws will take away their guaranteed minimum price and leave them at the mercy of big retailers. 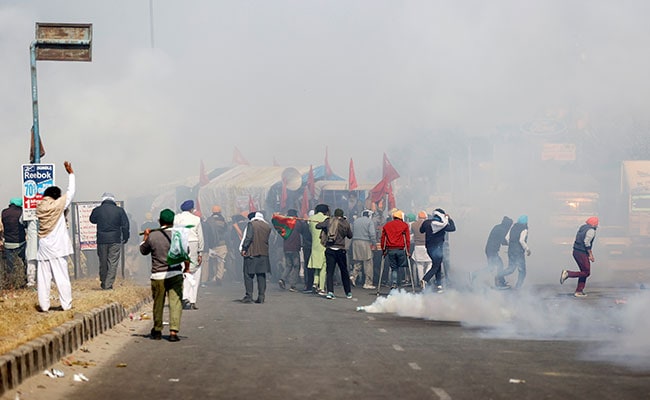 Farmers March in Delhi: Farmers faced a lathi-charge and tear gas at the Haryana-Delhi border.

Plumes of smoke were seen at Haryana-Delhi Singhu border as security personnel used tear gas to disperse farmers who are heading to Delhi for a two-day "Chalo Delhi" protest march against three farm laws enacted by the centre recently. Besides the tear gas, security personnel, dressed in all protective gear, were seen marching towards the crowd, who also braved water cannons and lathi charge as they attempted to march to the national capital to put pressure on the Central government to get the law repealed.

"We have loaded food material for months and cooking utensils in our trolleys. We're all headed towards Delhi now," one of the protesting farmers was quoted as saying by news agency ANI. Another protestor said: "We are approaching Delhi peacefully. They are trying to stop us by using tear gas and water cannons. We are the farmers of Punjab, we provide food grains to the people of the country. We are going to get our rights."

Farmers claim that there protest will be peaceful and that no harm will be done to any person or property.

"Whatever we do will be peaceful. We will not harm any person or property. Even if we have to stay for a month, we will. Even if we will have to attain martyrdom, we will," said one of the farmers.

"Police personnel are trying to maintain the law and order. Police were deployed here. But due to the large strength of the farmers, they surpassed the barricade from here and moved ahead towards Delhi. We have several other barricades in Sirsa,'' said SDM, Kalanwali (Sirsa).

The Delhi Police had sought permission from Chief Minister Arvind Kejriwal's government to convert nine stadiums into temporary prisons but the request was turned down.

Mr Kejriwal has backed the farmers' protest, saying that peaceful protest was a Constitutional right and the use of water cannons against them was a crime.

The farmers believe that the new laws will take away their guaranteed minimum price and leave them at the mercy of big retailers. The government, however, says the bills bring in much-needed reforms in the sector and empower farmers by allowing them to sell their grain anywhere in the country.

The Farmer''s Produce Trade and Commerce (Promotion and Facilitation) Bill, 2020 and the Farmers (Empowerment and Protection) Agreement of Price Assurance and Farm Services Bill, 2020 were passed by the Upper House in September through voice vote despite objection from opposition parties.