Disbursement of Defence Pension is a complex process involving many agencies and Defence Accounts Department is working tirelessly to provide pensions in a time-bound manner, Rajnath Singh 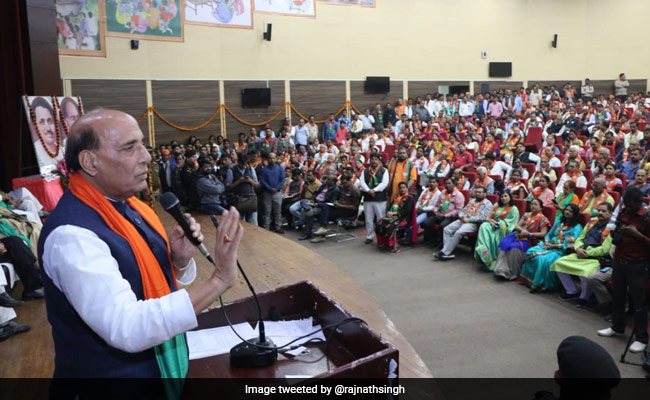 This Defence Pensioners Adalat is a small step in that direction: Rajnath Singh

A Defence Ministry release said the two-day Defence Pensioners Adalat aims at redressal of pension related grievances of veterans of Armed Forces and their Next of Kin residing in all districts of Uttar Pradesh.

It has been organised by Principal Controller of Defence Accounts (Pensions), Prayagraj in close coordination with Headquarters Central Command.

"Disbursement of Defence Pension is a complex process involving many agencies and Defence Accounts Department is working tirelessly to provide pensions in a time-bound manner," the Defence Minister was quoted as saying.

Reiterating the Government's commitment of timely approval of pension, Singh assured that the Defence Accounts Department will leave no stone unturned to deal with any challenges that come in the way.

The Defence Minister added that the Government fulfilled the long-standing demand of ''One Rank One Pension'' that has benefited lakhs of Defence Pensioners across the country. He lauded the role of the veterans in nation building terming them as a source of inspiration for generations.

Mr Singh highlighted Lucknow as the birthplace of martyrs like Captain Manoj Pandey and Company Quartermaster Havildar Abdul Hamid saying that the nation will always be indebted to their supreme sacrifice.

This Defence Pensioners Adalat is a small step in that direction, he said.

In his welcome address, General Officer Commanding-in-Chief (GOC-in-C) Central Command, Lt Gen IS Ghuman said, of the total 31 lakh veterans in the country, about four lakh are in Uttar Pradesh and this Defence Pensioners Adalat has been organised in Lucknow after seven years with the efforts of Defence Minister.

"Along with pensions, Ex-servicemen Contributory Health Scheme (ECHS), job and resettlement have also been covered in the two-day event," the Defence Ministry release quoted him as saying.

"Defence Accounts Department is going digital and a Comprehensive Pension Portal is about to be launched to address all pension-related grievances on one platform," Mr Mittal said.

"After the inaugural ceremony, Rajnath Singh met the veterans and interacted with the functionaries occupying various stalls for the aid of veterans, Veer Naris & Next of Kin. Various Army and Defence Accounts officials along with a huge number of veterans were present on the occasion," the Defence Ministry release said.