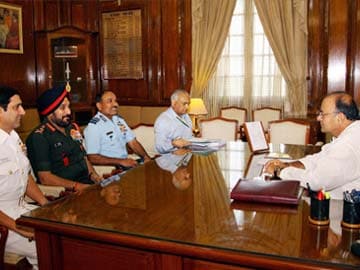 New Delhi: Defence Minister Arun Jaitley was briefed on Friday by the Air Force on its operational preparedness and its immediate requirements such as 126 Rafale combat aircraft for carrying out its assigned tasks.

The presentation was made by the top IAF brass to the Defence Minister at the Air Headquarters and it last for over an hour, IAF officials said.

The Defence Minister was also briefed by IAF on the ongoing Indo-French exercise 'Garuda-5' in Jodhpur where France has fielded its frontline Rafale combat aircraft, which have been selected by India for its requirement of 126 multirole fighter planes, they said.

IAF also briefed the Minister, who was accompanied by the Joint Secretaries looking after the functioning and procurements of the force, on its present capabilities along the two frontiers with China and Pakistan.

The force has acquired certain important capabilities in form of C-130J Super Hercules transport planes and C-17 Globemaster heavy-lift aircraft in the recent past along with Mi-17V5 choppers but lost one of its six C-130Js in an air crash.

IAF is also understood to have stressed on the need for procuring the 126 Rafale aircraft for strengthening its capabilities and also to replace its ageing fleet of MiG-21 and MiG-27 combat planes.

IAF chief Arup Raha will also visit the exercise area on Monday where he will fly in a French Rafale aircraft while his counterpart from France would fly in a SU-30MKI combat jet.

IAF is also learnt to have pushed for the early finalisation of the deals to procure 22 Apache attack choppers and 15 Chinook heavy-lift helicopters for the force.

The two deals are in final stages of being cleared and it is learnt that they were held back by the previous government due to the lack of funds with it for fresh procurements.

Promoted
Listen to the latest songs, only on JioSaavn.com
On Thursday, Minister of State for Defence Rao Inderjit Singh and Navy chief Admiral Robin Dhowan had also called on the Home Minister in his office.